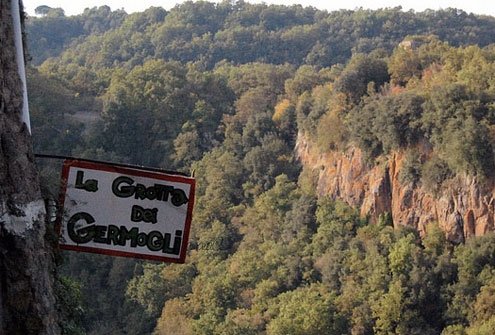 woman walks into a restaurant one night in Calcata, Italy. She has flame-red hair and looks a bit like a bird, with her hooked nose and sharp chin. In fact, it turns out, she lives with birds — 21 of them, to be exact, many of them crows. One crow in particular, she says, likes to have its beak caressed, but only by men. The woman — an architect, painter, sculptor, and Egyptologist who adopted the Egyptian name Athon several years ago — lives in a cave on the edge of a sheer cliff where the wind whips up with particular ferocity. Her edge of town is unlit. Visit her at night after a few glasses of wine and a momentary stumble could be your last.

“We’re all nuts, but she takes the cake,” Pancho Garrison, the owner of the restaurant, says affectionately. “People tend to think we’re all either drug addicts or freaks.”

A distant view of Calcata suggests just another exquisite medieval hilltop town. But drive up the mountain, talk to some of the eccentrics who have settled in over the past few decades, consider the town’s unique history, and it’s an altogether different story.

Thirty-odd years ago, on the verge of disappearance, Calcata stirred back to life. In the 1930s, the Fascist government included the 16th-century town on a list of places too unstable to inhabit. A fault line might open up; the buildings might buckle. In the 1960s, at government expense, the village was abandoned and residents were given houses in a modern settlement up the hill. Calcata became a ghost town; it never did collapse.

Along came some pioneering hippies and artists in the 1970s. They bought the medieval buildings for a song and set up house. Some of the spaces revealed a secret bonus: Etruscan caves, dating from around 1050 B.C., where the primordial ooze of life was as palpable as the damp walls and ground, and where some artists carved out studios and homes. There was no water, no electricity, no central heating, and no cars allowed, but free love flowed, and with it the usual assortment of chemical diversions.

Modern conveniences have infiltrated over the years, but cars are still restricted in Calcata, and a bohemian spirit lingers. The entire town, a 45-minute drive north of Rome, is smaller than a city block in Manhattan. It rises up out of a mountain of tufa rock, which has a high percentage of radioactivity and which, as local puppet maker Marijcke van der Maden puts it, “can cause a certain agitation.” (Others simply say that some people lose their minds.)

The cliffs along the perimeter of town drop off perilously. Look down and around and all you see is wilderness — an expanse of protected land called the Valle del Treja, home to foxes and vipers. From up above, where the hawks circle around, there’s a suspended, edge-of-the-world feeling that heightens an ordinary tourist experience into something both inspiring and vaguely spooky.

“It’s the power of the past — remote stories that are always present. There were sacrifices, ancient rituals here. There’s a strong sensation of a very old civilization,” says Gianni Macchia a star of raunchy B-movies back in the 1970s and now a painter.

In Calcata, you can’t swing a stray cat without hitting some sort of artist. Sculptor Costantino Morosin did his own survey and found that out of 80 full-time residents, 54 were visual artists. Add some writers, dancers, and musicians (including American jazz drummer John Arnold, grandson of renowned songwriter Hoagy Carmichael) and pretty much the whole town is drawing on the right side of the brain.

Calcata is barely known among American tourists, or even among Italians, but a handful of Romans have discovered it. They make the easy day trip on weekends to cruise the smattering of shops and art studios and eat at the town’s several good restaurants. The most forward-looking cuisine comes out of Garrison’s establishment, La Grotta dei Germogli (the Sprout Cave). An expat Texan and former dancer and choreographer, Garrison arrived in the 1980s and started renovating the series of rough caves that house the restaurant, a beautiful low-ceilinged den where the mosaics he makes from recycled materials decorate the walls and floors. The menu includes “exaggerated brownies.”

“I felt like a primitive when I first came here,” he says. The primeval energy fed into an overall transformation that’s a common theme among the Calcatesi, who have made lives out of the bits and pieces of rock, history, and isolation that come with the territory. “For me, it’s all the same — dancing, cooking, making mosaics. It’s all alchemy.”

The town itself is undergoing transformation. People come and consider buying homes. Roman hipsters lurk. The cave of Athon of the Crows could fetch a pretty price, its deep Etruscan sanctuary a potential home-office for some quiet-seeking Web designer. But Athon’s not selling. She’s in the process of becoming a full-fledged hermit, or maybe a hawk that’ll help keep the viper population down.