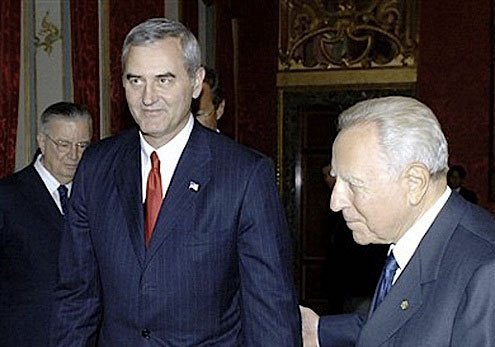 ow here’s something novel. A new U.S. ambassador — appointed by the Bush Administration — who introduces himself to the national media in nearly flawless Italian.

Who cites Cavour, but not casually.

Who mentions Pavese, the writer not the soup.

Who pokes fun at veline without sounding forced.

Who resided in Florence in the early 1970s, in the leaden years before the Tuscan Sun.

It is nice to be surprised by an envoy. It’s even nicer to know he doesn’t need to impress. He’s not running for anything.

Ron Spogli won some minds when he met the Italian and American press at an informal lunch at Villa Taverna. Hearts are far harder to find. Italian journalism’s inbuilt skepticism toward authority figures is matched only by its fawning appetite for such figures, particularly when there’s a lunch in ballo. It’s a hackneyed truth that skeptics are on best behavior when fed.

But on to Spogli.

The California venture capitalist who attended Harvard Business School with George W. Bush cut a cool and elegant figure. He’s a tall, open-faced man who bends graciously if diffidently into conversation. His prepared remarks, refreshingly non-partisan, mattered less for their glad awareness of Italian culture than for their unexpected sophistication. At times Spogli, whose family has roots in Gubbio, sounded positively European.

The availability of news, he said, was a wondrous thing, though bordering at times on the excessive. Touché.

First impressions can mislead. My father fell for an action-figure Socialist of the early 1920s. He wrote glowing dispatches about Benito Mussolini to his New York editors, so much so that the McCarthy Commission later investigated him as a Fascist sympathizer. The admiration vanished by 1930 as the Italian political experiment turned nasty.

But an ambassador is no prime minister, let alone a dictator. Ambassadors have long resided on the fringes of relevance. The Cold War briefly turned the truism on end: Andrei Gromyko in Washington, George Kennan in Moscow, David Bruce in London, Chip Bohlen in Paris. It’s a long and illustrious list.

Cold War stakes ensured that insiders got most of the key postings. All that changed after 1989. The State Department, never a cash cow, wrinkled from disuse. Embassies focused on consular, commercial and military concerns, to the exclusion of diplomatic dexterity. Elegance, already scarce, vanished. Language skills slipped. Intelligence was centralized in Washington.

The list of American ambassadors to the Italian state since the World War II is a modest one Many were prosperous men rewarded for their party loyalty and deep pockets. Clare Booth Luce was a postwar novelty. John Volpe, a Nixon appointee and former cabinet official, did everything but sing “Volare” to Pope Paul VI. Italian-speaker Richard Gardner, a vain Democratic Party intellectual with an Italian wife, played viceroy, proconsul and confidant to the Italian ruling elite in the difficult 1970s. Max Rabb, once Dwight Eisenhower’s chief-of-staff, managed the job smartly in the Libya-scare 1980s. By appearing clueless (he was not) he outwitted adversaries who thought themselves more clever (they were not). The Bush-Clinton 1990s brought Italian-American businessman Peter Secchia, a comprehensively minor figure, and later Reginald Bartholomew, a too-shrewd careerist who (like Gardner) enjoyed his celebrity status among Italians.

Spogli’s immediate predecessor, a septuagenarian shopping mall builder named Mel Sembler, objected to Italy’s arcane business standards, and said so. He then helped broker a $85 million deal to purchase a new wing of the embassy and didn’t wince when congressional friends ensured the annex would be named after him. Both Sembler and Spogli are unabashed George W. Bush supporters.

But there’s something tangibly different about Spogli. He emanates self-conscious curiosity. He graduated from Stanford University at the height of the West’s ideological ferment. At Villa Taverna, he openly deprecated political double-talk, vowing to avoid it (we’ll see). He also spoke cautiously about the information age, articulating one of the more confusing questions in the modern democratic canon: When does freely acquired information become excessive?

Spogli cited crowds in St. Peter’s Square after the death of Pope John Paul II and the masses who braved pelting rain to take in Rome’s Notte Bianca as examples of youthful idealism. That’s a risky call in an epoch where collective participation is law-abiding and often bereft of critical thinking. Whether idealism is enhanced by social conformity, and whether it’s idealistic at all, can be roundly debated.

And Spogli’s comes to the debate from a position of privilege. He’s a billionaire businessman who lives in the capital’s most spacious diplomatic villa and represents an administration whose compassion has been selective.

All the more reason for him to dispense with tossing out ideas. Why bother? But Spogli did bother. He is open-minded and intelligent. And that, for those who appreciate the precious nature of reflection, is chapter one of civilization.