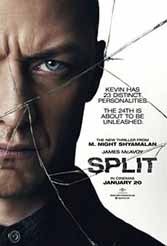 After two impressive early efforts, “The Sixth Sense” and “Unbreakable,” M. Night Shyamalan lost his mojo and pumped out a slew of duds. “Split,” a thriller about a troubled man with double-digit personalities, reclaims a sliver of Shyamalan long-lost verve.

Three attractive teenaged girls are kidnapped and locked in a basement where they’re in the keep of Dennis, the assertive kidnapper; Patricia, an effeminate matron; and Edwige, who thinks he’s a nine-year-old boy — Scottish actor James McAvoy romping through all three roles. Dennis is the dominant, hoarding “the light” on behalf of the 22 meeker interlopers. The girls are his hostages in a grisly plot to get the world to pay attention.

In reality, Dennis is Kevin Wendell Crumb, a child abuse victim and a patient of a psychologist, Dr. Karen Fletcher (Betty Buckley), who thinks she understands him.

Among the girls, can-do Casey (Anna Taylor-Joy, she of the melancholy face) has a dark past of her own that Shyamalan details in clunky flashbacks (taught to hunt by her father and abused by her uncle). When Dennis hints at the existence of a superhuman 24th personality, “the beast,” a creature that craves “sacred food,” the ante is upped into carnivore territory.

Hollywood has long served up multiple personality menu items and Shyamalan offers nothing particularly new, except perhaps the sheer number of inner souls clamoring for external attention. He covers all the thriller-horror bases — claustrophobia, sexual menace, helplessness, and a monster in the making. “The broken are the more evolved,” howls personality no. 24, avenging victim supreme, who leads a climatic charge with only Casey into stop him.

By then, and notwithstanding McAvoy’s best efforts, Shyamalan is running on fumes, his overly ambitious and weakly transitioned storyline suffering from a identity disorder as deep as its most riveting characters, undermining if not wasting a provocative promise.