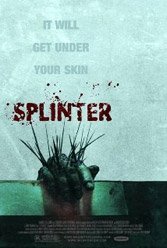 Toby Wilkins’ one-trick creature feature, a B-movie to its guts and core, should have gone by the name “Porcupine Madness.” At the very least it knows not to take itself too seriously.

Nerdy Seth (Paulo Costanzo) and enterprising Polly (Jill Wagner) are young marrieds camping out in rural Oklahoma. Hick Farell (Shea Whigham) and druggie Lacey (Rachel Kerbs) are cons on a lam. Before they’re predictably bunched together we’re introduced to a scurrying life form that skewers hot humans for lunch. When the cons hijack Seth and Polly, the skewer rats come out to play. The lurid action is pushed to a last-stand gas station, with the quill-rich parasites eager for more. It’s us-against-them, with even con Farell predictably turning noble.

Parody aside, horror movie conceit depend on empathy. You have to like the trapped folk enough to hope they survive. Or like the monsters enough to see more of their armament. Sadly, there’s not enough to like on either side and hardly enough one-line comic relief (“It, ah… it took half of her…” doesn’t qualify).

Wilkins clearly knows all this and tries instead to let his nasty charmers — including an awkward walking hand — do most of the heavy lifting. A cop tracking down Farell is eviscerated, spinal column first. Nice trick for the genre (it even won a “mutilation” award), but not even the memorable severing helps the movie’s whole. Seth does eventually get around to telling Polly that they should consider vacationing in Hawaii. Good idea.