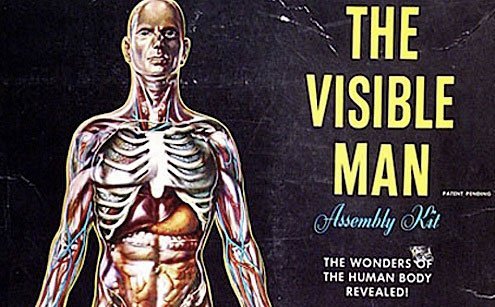 I busied myself painting the Visible Man’s trout-shaped liver — which the instructions referred to as “lover,” puzzling me further.
T

he Visible Man had no penis. Pancreas yes, shaped like ugly corncob. Also a plum prostate and two lima bean kidneys that often disappeared into my piles of corn candy, putting me at risk of casual cannibalism.

The Visible Man was exacting. Too much glue (which had the aroma of almonds and sweet vinegar) and I’d melt portions of the auburn stomach. Distraction was unwise while building man. I felt God’s frustration.

By the time I got around to tinkering with my man’s transluscent groin his torso had been eroded by glue’s all-night nibbling. He drooped.

But that still didn’t explain the absent penis.

Using the infant-English of the period, the manual announced man as “a complex organism” with “many details.” Man and details, said the small print, were made in Hong Kong, which evidently ignored the penis. Or managed without it.

My father, a part-time sage, couldn’t help. He told instead of three-legged men and towering Tutsi. I dreamed myself into his stories and I sat around mesmerized.

Or maybe a model penis was just too risky. A glue mishap could imperil the species. Maybe they worried about this in Hong Kong.

The Visible Man consumed me because he was all I had (until model warships). Our highbrow cats got bored with my relentless petting and the TV was off limits. At 11, my choices were the Visible Man or books. The latter struck me as dumb. Why read a book when you could make a transparent man, albeit a plastic one?

The instructions explained the word “man” derived either from the Old High German or the Sanskrit expression manu.

I immediately pondered the difference between Old High Germans and New Low Ones; maybe newer Germans had no penis. Sanskrit, I guessed (Hong Kong in the balance), was the language spoken on beaches.

Meanwhile, I busied myself painting The Visible Man’s trout-shaped liver — which the misprinted instructions referred to as lover, puzzling me further. The “liver,” or lover (from the Old High German “lebra“), allegedly secreted enzymes and caused all sorts of vital conversions, which I misread as “conversations.”

But the glue mocked my caution and the “lover” soon turned blob-like.

According to the box, the purpose of the Visible Man was “to teach the young adult the ‘m_racles’ of anatomy.” The “i” had been dislodged with the price sticker, leaving me with the prospect of what looked like “maracles.”

The kit’s owner, the box added, “will build his own man!” “You will be astounded as your man comes to together, revealing the complex workings of the body!”

Out of synch with Creation, it took me two weeks to build (and melt) my own man (which came with “complete skeleton” and “all vital organs.”) The box itself issued fierce challenges — “Assemble, remove, and replace all organs!” — seeming to take incidental destruction in stride.

When bored with my sagging creation (usually after school) I’d focus instead on two-dollar bills. I loved their obscurity. I read comic books about the exploits of warplanes — “the most potent the world had ever known!” I lived for exclamation points. They seemed to make life so sure. “A modern American miracle!!” blurted one comic book about a certain plane (misspelling “maracle”).

These exhortations, coupled with slow disintegration of the large intestines (I’d inserted them just over the liver/lover), made me reconsider the absent penis. Maybe it simply didn’t qualify as a “vital organ.” Or maybe Sanskrit Hong Kong protected its exported men from glue abuses.

I’d melted down the lover.

It stood to reason the Hong Kong penis had been spared my wrath.

Amid so much boyish chaos, the American “maracle” still in high gear, why favor such mystery with an explanation? My father certainly didn’t. Instead, he eyed my dilapidated man sadly, tapping my head in sympathy. The cats meanwhile tapped their Siamese paws on the empty glue tubes.

No, a penis wasn’t vital. Not then. Not to a boy who didn’t need to know everything just yet. The Visible Man, I know now, had separate goals, naïvely implied and tucked away for a time up ahead, when innocence would relinquish its grand franchise and retreat forever.