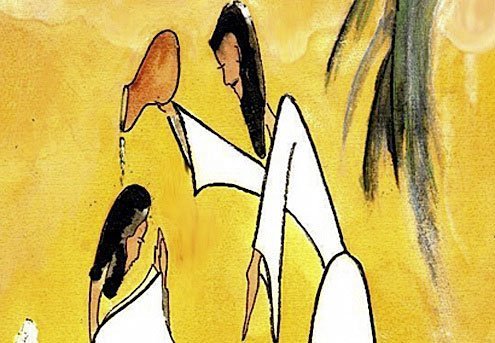 When they discovered I’d never been baptized, they found it odd, like a missing piece of me.
S

oon, I’ll be embarking on my next big adventure with Fabio. I’m not talking about marriage and the romantic weekend getaway to Paris.

Ah, yes. I’m becoming Catholic and my first step to membership is getting baptized.

I’ve always considered myself Catholic (or a Christian, to say the very least). Yet, what I didn’t know was that I wasn’t an “official member.”

I’ll explain. About a year ago, as Fabio and I were leaving Sunday Mass (Note: a sign of faith on my part), he scanned a bulletin board for information about confirmation classes. This was of course on the hunch that we would get married some day.

That’s when he discovered I’d never been baptized. His friends, his family, and everyone else found it odd, like a missing piece of me. But then again, they found a lot of things odd. After all, I was a straniera (foreigner). Not only do we do things differently but we inevitably do them oddly.

I decided to consult a priest. “Italians will find it very odd that you as an adult have not been baptized,” he said.

He broke down the process. It wouldn’t be simple. We talked about my faith. We then discussed my relationship with Fabio. And, stupid me, I forgot I was with a priest when I told him Fabio and I lived together.

He quickly corrected me: “You mean, you share a roof.” After all, a couple living together before marriage is a sin. Oops.

Finally, we discussed the reasons why my parents hadn’t had me baptized. Apparently, giving a child the right to pick their faith (or not) was big in the “hippie days.” My mom just loved the “hippie days” line.

In the end, the priest agreed to sponsor me — sponsorship is a must — but first he wanted to know how dedicated I was. He wanted me to do it for the right reasons. But most of all, he wanted me to reflect. Entering the Catholic Church is no cakewalk. To get baptized, I’d need to take catechism classes every week for about six months.

This made me reflect.

In fact, I spent practically the whole summer reflecting. October rolled around and the priest presented me with a book and a syllabus, including assigned passages and supplemental readings from the Bible. We met weekly to discuss the reading. I even picked up “Catholicism For Dummies.” That didn’t impress the priest.

Some meetings were discussions, others were debates. He said I was too hung up on sin. I told him I couldn’t help it, that sin and evil seemed omnipresent in human actions. That conversation alone lasted three weeks. Don’t think about it so much, he said finally.

But in fairness, I was learning.

Now comes the real test. With my baptism just around the corner, I’m actually getting nervous. Apparently, it’s recommended that adults be baptized, confirmed, and receive communion at the Easter Vigil on Holy Saturday. This is a well-attended Mass, or so I hear. Fabio’s whole family and some of my friends are planning to come.

I just hope I don’t get stage fright and get the sign of the cross wrong. Otherwise, it’ll be, “She’s straniera. God bless her.”