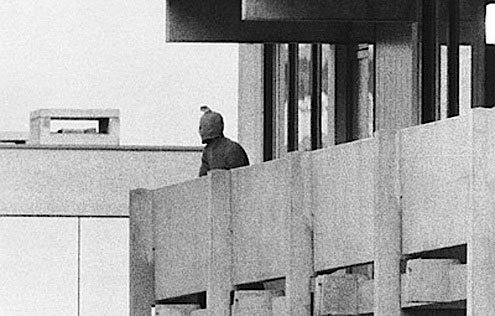 The real Munich massacre gets ABC News highlights, but Spielberg, below, picked Budapest to play Rome.
I

have a question for Steven Spielberg: Why not Rome?

The unsatisfying answer, I suspect, is money.

The context is the newest Spielberg opus, “Munich,” a Schindler-style recitation of events that allegedly followed the Black September terrorist operation at the 1972 Munich Summer Olympics. The film fluently tracks an Israeli hit squad presumably approved by Golda Meir to hunt down and kill the Palestinians behind the Munich attacks.

American columnists have quarreled over “Munich” because it anguishes over the worth of tit-for-tat violence at a time when political morality prefers cymbals to violins. That Spielberg is a Jew increases the clatter. (“Syriana,” a more intellectually cunning film about the Middle East, trumps “Munich” at many levels, but I won’t play critic.)

The Munich massacre details, as well as a few Israeli scenes (shot in Malta and Hungary), are removed from excessive scrutiny through the use of ABC News archive footage with the despairing face of ABC Olympics anchor Jim McKay. Even foreign accents, the black hole of Hollywood caricature, are within acceptable limits.

But when the incipient assassination team is told by French go-betweens that a Palestinian intellectual, among the 11 men thought to have masterminded Munich, will read from his Italian translation of “Arabian Nights” in Rome, visual problems begin.

The targeted Palestinian appears on a curbed, Viennese-style sidewalk. He speaks Italian agreeably, but nearby apartment buildings around are strict and chalky. A church in full view has a typically Orthodox bulbous cupola. The too-neat corner store (where the rotary phone and glass milk bottle fit the early 70s) is maddeningly Slavic. A saleswoman behind a stiff, Saxon counter speaks weedy Italian. The street the Palestinian takes to get home, despite requisite Alfas, is austere — so are the Central European doorway, apartment corridor and elevator cage, in front of which the man is gunned down.

Why the distracting mismatches?

Since the mid-1990s, Prague and Budapest have cast themselves as inexpensive “one-size-fits-all” European locations, just as cheaper Canada often doubles for the United States. Morocco and Oman assisted with “Syriana,” which ventures into Pakistan, Iran, Beirut, the Persian Gulf, and a fictional emirate.

While Oman is an emirate and Morocco can effectively double for Pakistan — the backdrops are desert highways, oil refineries, and Western-built glass hotels — Budapest just can’t play Rome. Mitteleuropean sobriety has no visual affinity with the messily Catholic south.

Streets and storefronts convey language. Backdrops inform the play of culture. Spielberg gets this when it comes to Paris, which he honors. Visuals are embossed with accuracy: the Tour Eiffel, Notre Dame, Pont Neuf, and so on. This established Parisian presence permits him to insert occasional Budapest specifics without disruption.

But Rome occupies the movie’s first segment, establishing its European presence. Viewers are asked to suspend disbelief for that segment only to restore it a quarter hour later when the action intensifies in the real Paris.

One bad chapter can derail otherwise strong narrative, and Spielberg generally avoids potholes. “Munich” ends with a scrupulous view of the New York City skyline showing the distant World Trade Towers still under construction. It’s due respect for 1973. The Italian scenes, meanwhile, are imprecise and sloppy.

Yet the lazier side of America’s approach to global affairs emerges when authority figures apply one-stop platitudes to murky situations they don’t fully understand or are in a hurry to fix. Conformity can’t be bothered with ambiguity— the invasion of Iraq is a painful case in point.

Look at the bigger picture, say the fixers. Budapest, Malta, Rome, who knows the difference? Who cares? It’s just a street scene. Just a movie.