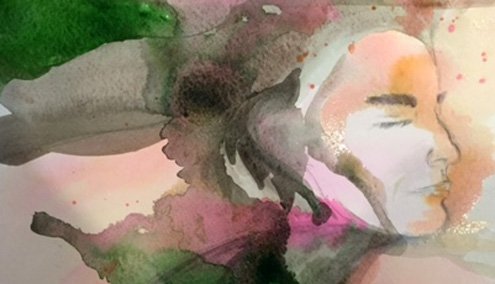 I've searched for nearly a quarter of a century for ways to combat my overactive inner world. Drawing by Jennifer Allison.
I

lay motionless in bed nestled beneath the warm down comforter while listening to the sound of my breath. A sliver of moonlight gave me all I needed to stare at the ceiling above me. It was late, and my house was silent.

My mind, however, was not.

There in bed, when I should have been sleeping, I felt exposed and vulnerable. Which to think about it is quite absurd: To feel exposed and vulnerable while in the safety and security of one’s own home and not while out in the world. But it’s when the business of the day is no longer blanketed around my psyche — the seemingly never-ending noise — that the merry-go-round of thoughts, worries, ideas, words, daydreams, stories and fears make their appearance. As does my racing heart and a hyperawareness of solitude.

These nights are not new to me. I’ve had them since childhood. At 15 my father gave me a meditation cassette tape. Though I still suffered through nights of panic and brokenness, the little tape became a sometimes companion for a decade. Fortunately, my sleepless nights come and go.

I’ve searched for nearly a quarter of a century for ways to combat my overactive inner world. “Just don’t think too much about it,” most people tell me reassuringly. Which is easier said than done. There isn’t much I don’t think too much about, whether an idea for a poem or worrying about whether I have enough for retirement when the time comes. I’m a thinker. I’m an over-thinker.

A medical doctor once insisted it was anxiety and offered to medicate me. I tried this remedy for six months but finally decided the medications weren’t worth the range of other problems they caused. Someone who didn’t even take aspirin was suddenly popping a pill daily to help with my fleeting anxieties. I turned to yoga.

My yoga teacher blamed an imbalance in my energy, my doshic states — between the so-called pita and vata dosha — so I changed my diet and worked on adding more earth and water elements to my practice. While the yoga helped (some 16 years later I’m still an avid practitioner) I still found the mad monkeys (rajas) of my mind rearing their ugly heads from time to time. So I reverted to my fiery backbends, handstands and spicy food.

Astrologers would blame the heavy Scorpio in my chart for my seriousness and incessant inner questioning of life. For a numerologist my situation was apparently obvious: “of course, you are a creative number 3.”

But these theories didn’t help me understand what was going on inside. I took their words as I take my fresh tomatoes, with a grain or two of salt.

In the end, it was someone far more unassuming would help me quiet my overactive imagination and calm my anxieties. She was an elderly woman who walked with a hunch, had a deep and manly voice, and among the warmest smiles I’ve ever seen. She had once run a busy psycho/hypnotherapy practice as well as authored a few books on the subject. On the verge of retirement, she sold her big house, closed her practice and bought a small home. But she kept a small home office where she saw a client or two.

After listening to my dilemma she asked me what I thought about simply accepting that I was naturally a deeper and complicated thinker, and instead of defending against my anxieties and overactive imagination, seeing them as a friends and teachers. “Work with it,” she advised me. “You don’t need to let your mind take over and go down a dark rabbit hole. You should consider letting the thoughts in willingly, then thanking them, and letting them go.”

The idea was a radical one. I had spent so many years trying to tame my inner world that being given permissions to accept my eccentricity, permission I’d never given myself, was both liberating and frightening. Before the end of the session, she casually mentioned she’d never had a client with creative tendencies that didn’t have a “vibrant” and occasionally “anxious” inner world.

Now, when waves of nighttime anxiety strike and I feel my breath quickening, I simply let it happen. With her help, I’ve learned how to embrace the complexities of my character while avoiding spelunking in the rabbit hole of fear and anxiety.

Sometime the rabbit hole proves too inviting and in I go, but it doesn’t happen often. Rarely do my thoughts turn to panic. Mostly I just let stream of consciousness take over, breath deeply, until vivid dreamland intercedes to find me.