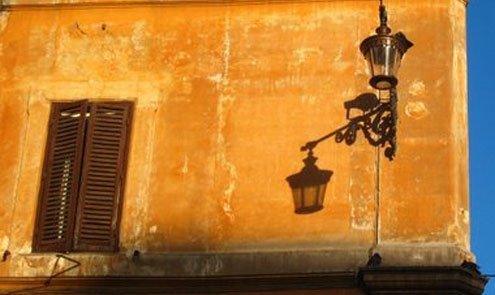 hen Margherita turned 30, she threw a party at her favorite bar, a posh-seeming yet unpretentious little Champagne bar where she had a running tab. She’d discovered the place about a year earlier while searching for a party venue, and had instantly adored the owner, Marco. He was kind and flirtatious, but never to the point of discomfort. His eyes lit up when she walked in. He always seemed to pay genuine attention when she told stories. He told her his own with great relish. He was the kind of man she felt comfortable meeting after a sweaty aerobics class. She could have one cocktail too many in his presence and make it safely home. He was a friend.

Unlike her late-night caller, the man who drifted in and out of her life, her after-midnight companion.

After her party, which was a smashing success, she sat with Marco and a few of his friends to cap off the evening. Among them was Gabriele, whom she noticed for his beautiful smile and matching eyes. But she did not fall asleep thinking about him. Instead, just as she was letting herself into the house, the usual phone call came in. She answered, and they did what they always did when it was late and they were lonely.

The following week she returned to settle her tab and collect what was left of her birthday cake.

“Gabriele asked about you,” said Marco.

“Really?” She smiled, flattered, but not particularly intrigued. She was busy with work. Though it was hardly ideal, her late-night caller had kept her mind from any serious pursuits of love.

A few days later, when her aerobics teacher cancelled class at the last minute, she and a friend went for drinks instead. Marco overfilled their wine glasses and pulled up a bar stool near their table.

“Gabriele asked about you again,” He said matter-of-factly. “He really likes you!”

“But why? He hardly knows me…”

“He’d like to know you better,” said Marco, winking.

“So tell me a little about him.”

Marco launched into a story of how they’d made eye contact one day when a truck was double parked in front of the bar, backing up the street. Gabriele was across the road to get home to his apartment (he lived upstairs from the bar), but the truck and then a pack of angry bikers blocked his path. He and Marco had exchanged a knowing glance that expressed everything they loved and hated about the chaotic city, its secret side streets and lovable, laughable citizens. After the road was cleared, Gabriele came in for a drink. They’d been practically inseparable since.

Gabriele was an engineer, said Marco, his eyes glittering. He was smart. He was amazing — both good hearted and hilarious.

While Marco spoke affectionately about Gabriele, Margherita watched him and felt herself warming to the idea that she might love Gabriele, too. She told Marco to give him her email address.

A few days later she received a short message from Gabriele. He hoped to see her again soon, he wrote. She waited a few days to answer. When she did, she told him how busy she was, and how she would certainly come to the bar soon.

When she didn’t show up at the bar that weekend, Gabriele emailed her again and asked for her phone number. He wanted to call her. He wanted to hear her voice. She gave it to him. Five minutes later the phone rang. She was startled and also pleased.

She let the voice bounce around in her memory until she had formed a better picture of the night they’d met. Yes, he was attractive. Even more so when he jokingly threatened to come and pick her up in that very moment and whisk her to their bar.

She felt tired and her eyebrows needed plucking. She laughed and said that he could pick her up sometime the next week.

She put on a pretty nightgown and curled into bed, this time with thoughts of Gabriele. At 2:30 a.m. the phone woke her. He was drunk and wanted to come upstairs. It wasn’t Gabriele, and she did as she usually did, but the beer on his breath bothered her more than usual.

One week later she was out with friends, and after a couple glasses of amaro, she looked in the bathroom mirror and decided that she looked nice enough to meet Gabriele again. She would surprise him at the bar.

As she pushed her way through the crowds she found him at the bar laughing at something Marco was saying. A smiling girl was at his side, and every so often he tucked her hair behind her ear.

Margherita dashed from the bar. Ashamed, she dialed a familiar number.