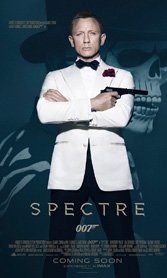 Not so long ago, the Bond franchise made something of comeback thanks to brooding, character-driven movie called “Casino Royale” in which 007, love interest, and arch-villain all seemed not only real but also vulnerable. Director Martin Campbell and new 007 Daniel Craig deserves considerable credit for that engaging mood swing. But since then, Craig has grown gradually more wooden, seeming to lose interest, while the scripts around his Bond (this his fourth) have lacked punch. Judy Dench as M managed to keep the institutional side lively, but now she’s gone. That the title song of this installment is “The Writing’s on the Wall” seems somehow apt. Not because Bond is about to vanish — he’s not — but because the thrill factor, while not gone, takes far too long to make constantly dramatic inroads.

Here, Craig’s Bond begins as rogue agent in search of an arch-villain, the “Pale King,” Ernst Stavro Blofeld (Christopher Waltz) that M tipped him off to before her assassination. Blofeld, once played wonderfully by Donald Pleasance, is the boss of heinous Spectre, whose acronym never gets spelling out, which is a pity: SPecial Executive for Counter-intelligence, Terrorism, Revenge and Extortion. He’s also “related” to Bond in the most twisted of ways.

The lengthy pyrotechnics begin in Mexico City, extend to Rome and Austria and eventually come to roost Morocco and London, the latter two venues carrying the best parts of the movie. As always, there’s no lack of scenery, gadgets, chases, and troubles on the home front — in this case a sinister effort to shut down the 00 program, now run by the new Q (Ralph Fiennes) but threatened by Orwellian-minded C (Andrew Scott). There’s Madeleine Swann, a prettied-faced damsel in distress, the refreshingly voluptuous Léa Seydoux, and she gives both Bond, and the climax, a pleasant jolt.

Plot-wise, though, it’s as if director Sam Mendes (back again after “Skyfall”) capitulates to Bond as a dour parody of himself, letting the sight gags and one-liners play out until, more than an hour in, villain Blofeld makes his full-fledged appearance and the pace picks up for the better. This might be fine for patient, die-hard loyalists, but it can be hard going for filmgoers spoiled by “Casino Royale” and who still hope for stories that can grip outside the superhero context. “If you go there,” says the wife of a dead villain (Monica Bellucci), “you are going to a place where there is no mercy.” But Bond goes, and, the despite occasional charming respite (Bond stares down a mouse), so do the rest of us.