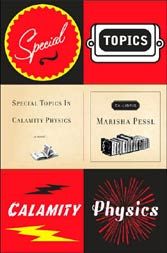 Bypass the clever’n’cruel pop fireworks that swarm Pessl’s inspired first novel and you get a Nancy Drew mystery caper with a noir ending.

Protagonist Blue Van Meer is a shy but precociously super-charged teen whose private life (school, friends, and father) is an autobiographical confession. For Blue, I.Q. 175, intellect exists to serve sarcasm, wit, and every kind of allusion. She filters most human action through book sources and titles, some real, others parody (“Christ, It’s Been Done Before: Celluloid Jesuses from 1912-1988, Why Hollywood Should Cease Committing the Son of God to Screen [Hatcher, 1989]).”

Or so it seems.

The mercurial father-daughter duo make narrative landfall in Stockton, North Carolina, where Blue enrolls in upscale St. Gallway and meets mysterious 40-something film teacher, Hannah Schneider, who has a penchant for Antonioni’s “L’Avventura,” and concocts a Sunday afternoon salon for five special students (including vixen blonde Jade, a Carolina Valley Girl with a mother called Jefferson.)