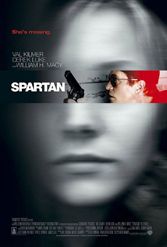 David Mamet puts together a simmering political thriller in miniature. Someone wants the president’s daughter dead. Val Kilmer, Mamet’s typically cold-talking protagonist, is a Secret Service agent who finds himself caught in a conspiracy. Which is where the riddles begin. The dialogue is pure Mamet: terse sentences, fierce, ice-pack elocution (“You wanted to go through the looking glass. How was it? Was it more fun than miniature golf?”) Kilmer is the intelligent man’s Jack Bauer; better said, he holds the line against the Bauer-“24” action hero parody. In Mamet’s hands, even Kiefer Sutherland might shine.