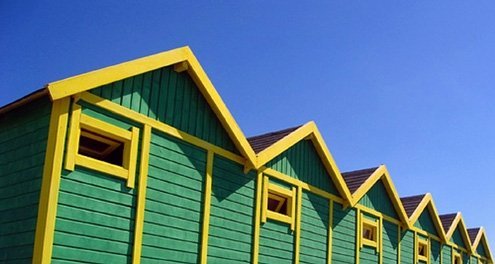 he Renaissance completely skipped over Sardinia. You’d be hard pressed to find examples of gilded mosaics or ornate frescoes on the island’s rugged landscape. Yet, what the island lacks in artistic masterpieces on the scale of say, “The David” or “The Last Supper,” it more than makes up for with its twisting backdrops of green-carpeted maquis and limestone grottoes — natural Sistine Chapel and Coliseum that lead many to label Sardinia Italy’s finest outdoor museum.

But that’s not what draws tourists. They don’t take a 12-hour ferry ride or board a 1985-vintage Alitalia jet to smell the juniper. They come because there’s no beach in Dusseldorf, or maybe Lake Erie falls short. It’s why everyone comes. Over one million tourists flock to Sardinia’s 1,700 kilometers of cobalt coastline each summer.

Chances are that you’ll be spending at least a few days in Sardinia’s capital, Cagliari — which houses the island’s largest international airport — or at least at its beach, Poetto.

Just a 15-minute bus ride from downtown Cagliari, Poetto stretches 11 kilometers from the cape at the Sella del Diavolo to Margine Rosso. It’s the longest city beach in Italy. On any afternoon when the maestrale wind calms to a whisper, as many as 50,000 people may plant themselves on the fine, white sand.

But be forewarned: the unspoken, and often ironic code of ethics that commonly govern Italian social life (see Chapter 2: “Do what feels good — except for cappuccino in the afternoon,” and Chapter 6: “Clean your apartment daily by littering the street below”) also extends to this far-flung part of the Mediterranean. To not stick out, respect the following guidelines.

1. Not much sunshine in Dayton? Head to the tanning salon before heading for Poetto. Don’t be selfish: Others must judge you, and a carefree pallid figure is offensive to the eye.

2. Pack well. We’re not talking about umbrellas and aloe, just the essentials: platform shoes, a cosmetics bag and Versace glasses (Prada is so 2007) for women. Note: Any glasses should be thick-rimmed and large enough to cover most all of your face. You haven’t coordinated your outfit and put on make-up because you care about popular opinion, you want some privacy, right? Men should consider an unbuttoned shirt to display freshly-shaved chests. Also, don’t forget to pluck those eyebrows.

3. Take the above accessories to the beach with you, but don’t leave your money in your Smart car — you’ll need to buy a bottle of water at one of Poetto’s many kiosks, each one blaring house music.

4. Depending on your hometown, you may be alarmed at the local bathing attire. Many local women — especially attractive ones — walk around topless and in thongs. But don’t look at them. They merely come to bathe in peace, and don’t need the unwanted attention of gawking maiali. However, if you happen to see the same women later that night fully clothed passing and through downtown Cagliari, you’re free to shout vulgar praise.

The local male population, meanwhile, prefers to don “il jock” — or “Speedos,” in western parlance. While there are diverging theories among beach academics as to why, the practice is widely regarded as linked to courtship. Whereas birds ruffle their feathers in heat, men along Poetto wear a tight piece of spandex that outlines their genitalia to remind females that yes, they do have genitalia.

5. Cagliaritani don’t “present” at the beach until after 3 p.m.

Would you arrive at a disco unfashionably early? We didn’t think so.

7. The Cagliaritani divide Poetto into sections according to the various bus stops found along its shores. Much like a high school cafeteria, each stop corresponds to a different kind of bather. Please refer to the following divisions and bathe accordingly:

First and sixth stops: Rich and trendy bathers, or anyone who goes to raves. (See “fighettus cagliaritanus””in the glossary).

Conclusion: The Uffizi has been overrated for years. The Vatican is stale. Instead, we suggest you join the crowds and stand firmly in line for what is truly Italy’s finest outdoor museum. Just remember, your uneven tan line will go away, but brutta figura won’t.