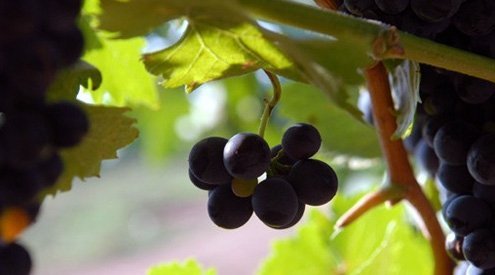 Pirro Varone wines include red made entirely from rediscovered Grisola grapes.
I

’d been meaning to visit Puglia for years. Beach, food and wine lovers admire its stunning raw beauty, fabulous beaches, crystalline sea and uncomplicated food offerings (grilled fish, burrata cheese, and orecchiette pasta with turnip tops). Half of Italy’s olive oil is produced in the region, which also makes more wine than any other. But knowing this didn’t quite prepare me for what I saw.

We’d gone to Puglia as part of a three-day August family getaway. First colonized by the Greeks some 2,000 years ago, the jagged, narrow region runs north-to-south along the tall Adriatic Sea heel of the Italian boot, the lower section facing west over the Gulf of Taranto. The Greek heritage suits a landscape rich in whitewashed flat-roofed houses and endless olive groves with gnarly thick-trunk trees and curved grapevines. The land is even and sunbathed and the flanking sea omnipresent.

Though Puglia winegrowing has ancient roots — the local soil is fertile and the sea breezes ideal — most of the region’s trove of grapes were usually sold to other Italian regions, hauled to Turin for vermouth-making, for example, or dispatched to France to help enrich poor harvests. That began changing at the start of the new century as the region started manufacturing its own wines, many of which are now top-notch and reasonably priced.

If you like fruit-forward and ripe red wine, Puglia wines are worth delving into. Negroamaro (bitter black) is most widely planted local grape while Primitivo — aka Zinfandel, known for its California connection — is probably the most recognized. Both are red, fruity and dry. Negroamaro tastes of blackberries, black cherries and herbs while Primitivo, the richer and more full-bodied of the two, suggests cherries, raspberries and spices. I’ve enjoyed them with salumi, cheese and pasta dishes.

On this trip, my brother-in-law and I — he’s a sommelier — decided to shake things up a little by seeking out and trying some more obscure Pugliese wines.

Part of the joy of wine is discovering new ones, and for wine-lovers learning means tasting. A tasting in a relaxed setting among friends and family can be a memorable occasion.

Setting aside Negroamaro and Primitivo, here are four local wines (two whites and two reds) well worth checking out.

— Pirro Varone, Rosso Salento IGP, Vigne Rare Rosso 2010 (13.5%) €14. Made entirely from Grisola grapes, this is an elegant, fresh and well-rounded red that pairs well with aged cheese or lamb stew. Grisola tastes of cherry, blackberry and raspberry and has a spicy, violet aroma. The rediscovered grapes are grown in Salento, the extreme southeast tip of the boot.

— Tenute Rubino, Salento IGT, Oltremé 2013 (13.5%) €12. Oltremé is a rare example of a 100 percent Susumaniello wine. Susumaniello is usually blended with other local grape varieties including Negroamaro. A deeply colored red, it’s a dry, fresh and fragrant red that tastes of cherries, raspberries and pomegranates. We savored it with crostini topped with eggplant, peppers and semi-sundried tomatoes. It also pairs nicely with grilled meats.

— Varvaglione Vigne & Vini, Verdeca del Salento IGP, Moi 2014 (11.5%) €8. It’s refreshing to taste a white in a region in which reds account for 80 percent of the total production. Verdeca is an indigenous white grape variety whose plantings and production are sadly declining. Moi is a light, fresh and interesting white with juicy white peach, zesty lemon and crisp apple notes. It’s delightful with grilled bream or pasta with clams.

— Botrugno, Salento Bianco IGP, Minù 2014 (12.5%) €10. The Minutolo grape has an interesting history. Used mainly in blends and previously known as Fiano Minutolo, it was salvaged from near extinction 15 years ago thanks to team of oenologists who all but stumbled on its old vines. Golden orange in color, Minù is slightly grapey but fresh with orange blossom aromas and white nectarine, almond and herbal flavors. Enjoy it with pasta with shaved black summer truffles or rabbit sautéed with Mediterranean herbs and white wine.