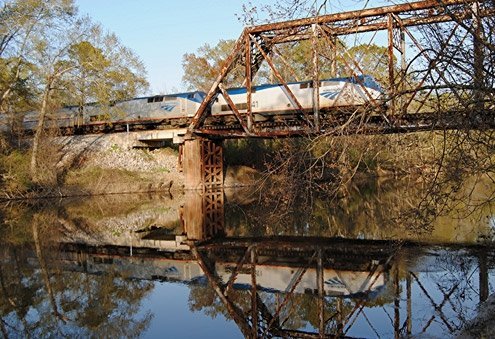 The Crescent crossing the Pearl River near Picayune, Mississippi.
B

efore my dash for New York’s Penn Station and a southbound train home, I’d managed to fill up a long weekend with upscale trappings.

First came a friend’s bachelorette party in Cape Cod, two days of phallic party favors, hard liquor, and fresh seafood, which left the merry women conspirators in high spirits if exhausted. After that I romped through Brooklyn with a newly engaged couple, where I ate far too much sushi and prepped for a long-awaited encounter with a Paris Review editor. We met Café Bergamot, a French-style café in Chelsea chock with pastries and sandwiches stuffed with pâte. We both ordered large café au laits and croissants and talked bright lights, big city.

How, she asked, was I getting back to Virginia and Charlottesville?

The train, I told her, and she beamed.

“I love the train,” she said, “It’s smooth sailing. Much better than bus”

I left the meeting in high spirits, convinced that big-city publishing success might come one café au lait at a time. She even let me park her bags at her office.

Still, I had plenty of time to kill before the train trip home, and killing time in New York City isn’t easy when you’re low on funds. I strolled to Chelsea Market where I sampled goodies and watched Asian tourists devour whole lobsters before noon. When I fetched my bags, I found the editor typing away furiously in an office that smelled like Earl Grey tea and books. New York and writing life was good, I told myself. It had to be.

But Penn Station offers a different set of smells, most emitted by anxious and sweaty travelers. My train was the 219, known as the “Crescent,” which runs from New York City to New Orleans, inching southward for 1,377 miles covered in roughly 30 hours. The route has been around for 120 years, with nineteenth-century brochures once advertising it as a “40-hour, unprecedented trip” that included an amazing novelty: a dining car.

Boarding it after the five days I’d spent on the Cape and New York seemed like entering a dimension light years removed from posh French cafés, the Chelsea Market, and the offices of the intellectually-inclined Paris Review. The “quiet car” I’d been craving didn’t exist, since the 219 has strayed from its luxury days. It’s now a very much a working class train with plenty of poor-town destinations (a New York-New Orleans can cost a third of a plane ride). I lugged my bags towards the rear and plopped myself down.

Then came the characters, beginning with the woman seated beside me in car 8, who preached aloud as if she’d just gotten to church. Around me, passengers munched on hoagies, chili dogs, and snacked on fried chicken, no pâte in sight. My New York City vanity was knocked sideways, my southern roots reborn, and (I admit it) my turkey wrap looked pathetic. I was also suddenly very hungry.

This cast of characters reminded me that New York, despite all its self-styled diversity, still remains a bubble of entitled people whose day-to-day life can make you feel wanton, spoiled, excited. “It’s a small white privileged world,” my bride-to-be friend Anna had told me, and she’s right.

Despite all my weekend walking and people watching, my days had been sheltered. It was the train life, and not that of city or Cape, in which most people live. That someone eager to move, to change, to better her lot, would find herself stuck on a slow train heading south seemed somehow appropriate.

At the same time, I started noticing the decency and endurance of my fellow passengers, many bound for Louisiana, North Carolina and Georgia. I felt at ease with my cheerful aisle-mate, who reveled in her ramen noodles, advised me how to push my seat back and flip up the foot rest, offered me cough drops, and helped me with my bags.

Despite its hyped melting pot character and its high-brow aspirations, New York City is anything but an ad for the kindness of strangers. Yet that kindness can be just what we crave and need, in my case a feeling satisfied less by the promise of the city I’m about to call home than by the people aboard the New Orleans-bound 219.