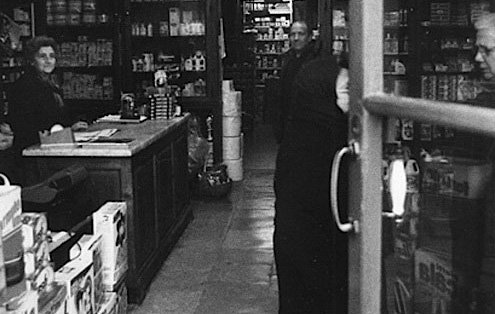 Shopping, Via Concezione, 97: Each morning, a centuries old dry goods store beckons me
A

few autumns ago I boarded a regional bus in rural Campania on a wistful journey to the village of Calitri, the birthplace of my emigrant ancestors.

For years I had conjured images of the place, a hilltop town rich in Etruscan history, but had no idea what the town might look or feel like. Nor did I expect to find anyone who knew me or my family.

Barely awake, I boarded a big blue bus on a quiet side street in suburban Avellino. The driver peered down from his perch like a stern but benevolent uncle, took the ticket from my hand. I was his lone passenger. Gazing blankly out the window, I settled in for the two-hour ride.

The last person in my family to make the journey was my grandfather Nicola, a former sergeant in the Italian cavalry, sometime in the early 1950s. Two generations later, I followed in his footsteps. Climbing through Apennine passes covered in forests of chestnut and acacia, the driver made slow progress pausing to pick up school children and commuting workers beginning their day. One by one they glanced at me, l’Americana, traveling on a route unfamiliar to her.

“Signora, this is your stop…”

Morning sun shone through mountain mist as the driver deposited me at Incroce ‘Cola in the Calitri town center.

Pensionati in dark suit jackets and 1940s fedoras stood in twos and threes as if tethered under a wide stone portico. A fruit and vegetable store owner wearing his cap and apron swept the clean sidewalk out front. The fruttivendolo, Signore DeMaio, noticed the bewildered young woman before him and sprang into action.

Within minutes, I was ceremoniously ushered around the village sharing memories with a small band of distant relatives, some of whom were contemporaries of my paternal grandparents.

Since that first journey I have returned in summer, when the mountain village is bathed in light, and winter, when black-clad women and stray cats populate the centro storico. I have wandered foggy slate-grey streets, camera in hand.

Last spring I purchased one of Calitri’s characteristic medieval stone houses — the house where my grandmother was born.

Carved into the keystone above the chestnut-wood doors of Via Fontana 21 are the initials “V.C. 1900” — Vincenzo Cicoira, my great-grandfather. In 1900, my grandmother Angela Maria was five years old. Twenty years later she would marry Nicola Paolantonio and travel from Calitri to the teaming ethnic neighborhoods of lower Manhattan and Brooklyn, where I was born.

CALITRI AT A GLANCE

About the Author: Angela Paolantonio

Angela M. Paolantonio, whose grandparents landed at Ellis Island, was born in Brooklyn, New York, and raised on Long Island. Her love of photography began as she watched her father expose and develop contact sheets on the family kitchen table. She holds a Bachelor of Fine Arts and Art History degree from Long Island University and is a photo editor and senior art producer and consultant for national and international advertising, design and editorial companies. She lives in Los Angeles and Calitri, Italy.