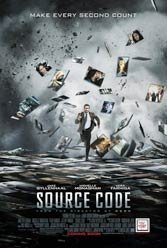 “You are the hands of a clock,” amoral scientist Dr. Rutledge (Jeffrey Wright) tells beleaguered time-tripper Captain Colter Stevens (Jake Gyllenhaal). “We set you. And you move forward.” This is none too pleasant a quip for the literally mortified captain, compelled to return for eight-minute stretches to the same Chicago commuter train at the same time in hopes of uncovering, what else… a sinister terrorist whose aim is to kill two million Americans.

Director Duncan Jones’ vastly overrated follow-up to the exceptional “Moon” is Hollywood hokum at its least challenging. Its sci-fi side premise centers on change-the-past ingredients, overturning what Superman’s parents admonished him never to do. The “real” story includes a love interest (Michelle Monaghan), intimations of life remorse (must call dad), patriotism, and a hefty dose of happily-ever-afterism, bad news for a film that seeks taught thriller status.

Gyllenhaal is suitable frenzied as Stevens, the military’s unwitting candidate for a top-secret “time reassignment” program called “Beleaguered Castle.” His handler is a pretty captain (Vera Farmiga) while civilian mastermind Rutledge is a sinister Strangelove type (Hollywood sinister types never get first names, and Rutledge joins that club). The shake-and-stir outcome is a noncomic “Groundhog Day,” a two-hour exercise in railroad hiccups that can’t get enough of its own (dubious) ingeniousness. Talk about beleaguered.