Sound of My Voice 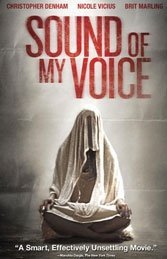 Con artist or time traveler? Shaman or fraud? Meet Maggie (Brit Marling), a pallid young enchantress who tells her cult followers she’s from the year 2054. She lives in a hermetically sealed Los Angeles basement to dodge the toxins of a world to which she doesn’t belong. Her method includes mixing New Age prattle with spooky if ambiguous foretelling. Her back-from-the-future mission, or so she says, is to recruit stalwart militia-folk capable of facing a post-apocalyptic world. Now meet lovers Peter Aiken (Christopher Denham) and Lorna Michaelson (Nicole Vicius), he a repressed elementary school substitute teacher, she a one-time socialite, coupled as amateur documentary filmmakers determined to debunk Maggie, whom the enigmatic Peter believes is preying on SoCal “suckers” who are “weak and looking for meaning.”

Easier said than done. Over the course of 10 brief cinematic chapters, director Zal Batmanglij’s intriguing and unsettling story (co-written by Marling) chips away at the cherished assumption of believers and skeptics alike. Peter, repelled at first, is gradually mesmerized; Lorna, at first intrigued, grows jealous of Maggie’s emotional power. Marling’s Maggie, at once passionate and doe-eyed, divides, and conquers, all the while sowing the seeds for the movie’s clever kicker, which is all about a secret handshake.

What starts out as a story about cults, scams, and the risks of being pent up and impressionable, gradually dons an insidious sci-fi patina. The resulting complications raise questions about what the accuracy of truth and who can tell good intentions from bad. It’s a contagiously affecting effort likely to earn its own kind of cult following.