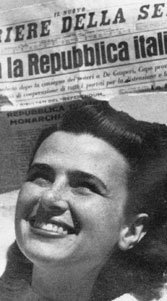 ook up members of Italy’s ruling classes on the Web and you’d think Machiavelli got a five-century jump on Wikipedia.

Last month lawyer and journalist Giulio Anselmi was named chairman of the news agency ANSA. Anselmi replaced Boris Bianchieri who left after four consecutive three-year terms, 12 years in all. Anselmi’s previous job was editing the Fiat-owned Turin newspaper La Stampa. Before that he was editor-in-chief of… ANSA.

Who replaced Anselmi at La Stampa? One Mario Calabresi, who previously worked for La Repubblica and… ANSA.

Where did Anselmi go after he was replaced by Bianchieri at ANSA? First to the weekly magazine l’Espresso and later to La Repubblica, which also publishes l’Espresso.

In a front-page column, De Bortoli said good print and online journalism should reflect “honesty, seriousness and constructive criticism.” A strong news organization had to “mirror the identity of its readers,” since citizens badly needed impartial information. “Our ruling class has a difficult time identifying priorities…” Dynamic thinking had to come ahead of yes-men and spin-doctors. Fair enough.

But who did de Bortoli replace? Paolo Miele. The same Miele who spent his formative years at La Repubblica and l’Espresso before running La Stampa and moving on to Corriere della Sera.

De Bortoli’s career got going in 1993, when he was named Corriere‘s deputy editor by… Miele. In 1997 he took over the paper from… Miele. In 2003, following a political turf war with Prime Minister Silvio Berlusconi, de Bortoli quit. Don’t even ask who replaced him.

Italy’s feudal hierarchy is “jargonzed” as intralazzo, which roughly means intrigue or racket. Its existing leadership picks only demons it knows. “Disguise your inclination” and “play the hypocrite well,” Machiavelli advised.

The unfamiliar means the volatile and the potentially upsetting. The luminous is scary and stands to upstages pre-existing inclination. No Barack Obama here — and it has nothing to do with race.

True, Silvio Berlusconi rode a puff of populist fortune into power in 1994. He was the gruff multitude’s smiling little jockey.

But his first go-round lasted only eight months and his revival chords haven’t deviated much from the original soundtrack.

Between them, Berlusconi and Romano Prodi (their right and left coteries in tow) have run Italy for 11 years since 1995, in the 40-year tradition of the Christian Democrats that preceded them (Aldo Moro, Giulio Andreotti and Amintore Fanfani governed 10 times between 1954 and 1992, serving a total of 94 years in government).

Lesser known figures set the tone. Ettore Bernabei, for example, managed RAI state television between 1961 and 1974. A staunch Roman Catholic and a devoted member of Opus Dei, Bernabei kept RAI in line with the Church. He helped delay the creation of a left-leaning third channel, RaiTre. By the time it went public in 1979, the Communist Party was in retreat.

Bernabei’s behind-the-scenes despotism coincided with Berlusconi’s formative years and helps explain why most Italian leaders assume political entitlement means media control. (When Antonio di Pietro’s “Values Party” did well in 2006 elections he immediately called RAI’s director-general. His question? “What’s in it for me?”)

Italian journalism has always less about reporting than adversarial holding forth. The Christians vs. Communists slugfest rules the waves for years. In 1970, Rome had 22 daily newspapers, all subsidized by parties and rigged ad revenues. Newspapers promoted political interests; parties favored certain businesses; conflict of interests was normal. Circulation figures, then as now, were impossible to verify. Independence was limited to choice of mistresses.

Try as Italy does to dress up the modernism of others — take Beppe Grillo’s blog — its cultural spoils system trips the circuit breaker. Grillo began his career as a satirist, an exaggerator by trade. He’s the subversive byproduct of the system that made him and which he exists to mock. He’s cranky but safe. (Just as Umberto Bossi plays, or played, thorn of outrage).

Idiomatic idealism is unscripted. It’s usually produced and greased by fringe players acclaimed into motion by historical accident. Italy’s Ferris Wheel of doppelgangers ensures spontaneity is checked at the door. What you recognize can’t hurt you. And Italy won’t stop memorizing itself.