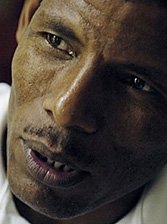 ittle things can make me cry. Sentimentality is a dialect that aging depends on to make itself heard. Take today.

In Berlin, the tiny Ethiopian runner Haile Gebrselassie, now 34, broke the world marathon record held by Paul Tergat of Kenya. I once knew both. I watched Tergat, a bony Rift Valley flyer, run cross-country races in the mid-1990s. Gebrselassie, a rural dwarf of surging sweetness, I met in Holland before his Olympic glory days. I worked for USA Today at the time. They were two good men.

After his record-breaking Berlin race, and during a press conference, Tergat phoned Gebrselassie to offer congratulations. The runners have always been close.

“I am sorry,” said Gebrselassie.

When reporters asked Gebrselassie about the exchange, he flashed a sweet-and-sour grin.

“I am sorry — this record belonged to Paul Tergat. Paul is my friend.”

“I really wanted to do this record but I was a little bit worried about it, worried about attacking my friend’s record. I think Paul understands that. I talked to him and said ‘Hi, Paul, I’m sorry.’ I said ‘You can come here and try to get it back again next year’.”

Such courteousness borders on the alien. “Sorry,” “friend,” “worry”: these are words concerning honor (and vulnerabilty) that the male lexicon often ostracizes. They cut into the alpha of things.

While sincerity and sentiment exist everywhere on paper and video, the feelings themselves are often manufactured. “In the present ‘culture,’” writes J.M. Coetzee in “Diary of a Bad Year,” “few care to distinguish — indeed, few are capable of distinguishing — between sincerity and the performance of sincerity.” It’s an important distinction.

I know Gebrselassie well enough to ascribe to him the incapacity to “perform” sincerity. He can run — he did so for thousands of kilometers, like Tergat, as a child — but he cannot lie.

His “apology” to Tergat was in the romantic spirit of World War I pilots who saluted their adversaries, win or lose. That romanticism, in turn, arose from the correctness of the stiff-upper-lip British Empire, which concealed acres of cruelty beneath its otherwise polite nod. Both Ethiopia and Kenya were colonies. Their families and teachers schooled Tergat and Gebrselassie in requisites of respect. Competing, they were told, demanded etiquette. Rivalry relied on honor for sustenance.

It’s glib to suggest that gallant impulses are gone, less so to say that self-effacement has lost its way. In a self-serving culture deference and modesty are unessential. Success is its own reward. Champions need only say thanks, not mean it.

Gebrselassie’s regret is a humble artifact of hard times. Gebrselassie and Tergat grew up poor. Neither is a billionaire athlete; both remember Africa. When I met Gebrsellasie — it was 1998 — he lived in a modest Dutch house with a tiny kitchen. We sat first on the couch, then on the stoop, and laughed like mischievous schoolboys.

Lance Armstrong, whom I met the same year but just ahead of his bicycle good fortune, laughed less if at all. He played tough, secluded, put-upon. Kind words were not hard to come by, but they were, one sensed, irrelevant. Hard-knocks had intervened. Armstrong wanted just to win, not to love or be loved.

I can imagine the conversation that preceded its filing.

“What did he say,” the editor asked the reporter.

“Nothing much, but he did apologize.”

“Apologize? For what? What’s with that?”

Nothing immediately understandable. So the reporter diligently wrote down what he heard while failing to recognize a display of unperformed sincerity that fast times — symbolic, not literal — have all but erased from any record book.