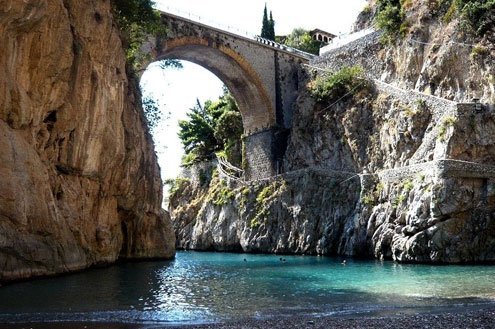 Furore has a magic kingdom quality that leads some admirers to call it "Neverland."
F

amous writers have long waxed poetic about the curvy coastline that runs from Sorrento to Salerno. Swedish doctor and author Axel Munthe built a villa on Capri. Henrik Ibsen moved from Norway to Sorrento, where he wrote his renowned play “Ghosts.” Italy-lover Goethe called this sliver of southern Italy the “magic land of endless sun where lemons bloom.” In the early 1950s American novelist John Steinbeck fell in love with Positano (“a dream place”) and begged people to keep the secret. They didn’t.

Despite more than half-a-century of mass tourism and wildfire exploitation, the Sorrento Peninsula and the Amalfi Coast still possess a few unexplored and approachable places not yet corrupted by impossibly high prices and artificially piped lemon-scents. Some remain authentically frozen in time.

But you have to seek them out. Here’s my shortlist of lesser-known Amalfi Coast destinations that retain some of the dreamlike quality Steinbeck marveled at when he visited after World War II. You’ll find phone numbers beside those that don’t have a website. Further details are listed at the bottom.

East of Sorrento, on the Massa Lubrense coastline, is Bagni della Regina Giovanna. According to legend, this private inlet and natural rock swimming pool is where 14th-century Naples queen Joan I conducted trysts with her young lovers only to hurl them from the cliff to prevent kiss and tell. You can drive here and park in a shady lemon grove, then walk down to the natural rocky patio for a private swim in sparsely populated waters. Pack a panino and some fruit and spend the day like a sea lion, or drive half a mile to the tiny village of Puolo and grab a plate of calamari or caprese salad at La Tavernetta, which sets its tables directly on the sandy beach.

Down the coast from Massa Lubrense is Baia di Jeranto, a yacht-free natural marine reserve rich in aquatic life. At nearby Marina del Cantone bay is the small beach town of Nerano where colorful two-storey buildings overlook a narrow strip of pebbles that descends into crystal waters.

The Lo Scoglio restaurant (open year round) is perched on a wooden deck built on stilts around a large boulder that gives the place its name. It’s known for one amazing dish: spaghetti with zucchini. Antonietta De Simone won’t share the secret family recipe (many have attempted to replicate the dish, unsuccessfully) but will gladly shuck fresh oysters and sea urchins fished out of the large central tank in your presence. Local aficionados moor their boats and scurry up to dine on her pan-fried garden vegetables, assorted antipasto platters and homemade limoncello. The adjacent bed-and-breakfast property has lovely air-conditioned rooms.

Near Nerano is another unfrequented little inlet, Baia del Recommone, which can also be reached by car via a scenic pathway. At La Conca del Sogno (open April-November), diners can feast on the day’s raw delights, grilled fish, tiny shrimp tossed with salt and pepper, pasta with crustaceans, or a whole salt-crusted and baked European bass.

The same curvy road (Strada Statale SS163) that runs south of Sorrento toward Salerno passes a number of secluded bays, boroughs and inlets. Positano comes first and still cannot be missed. If you want to visit the town, your best bet is to stay elsewhere. Once, secluded and nearby Fornillo was that place. But these days even Fornillo can offend both wisdom and wallet. If you do stay, try Pupetto Lido and treat yourself to a sunset stroll on the “lover’s lane” where you can grab a drink or rent a kayak.

For a day trip, make your way to the Positano dock and take a seven-minute boat ride to Laurito beach and Da Adolfo, which offers a free shuttle (open year round). Once there, you can switch off your mobile devices and get the digital detox that comes from secluded beach perks and chirping cicada songs. On the lido, Sergio Bella — son of original owner Adolfo — serves mozzarella grilled on lemon leaves, juicy stewed mussels and clams, grilled fish, juicy roast chicken “alla Adolfo” while pouring local white table wine from jugs filled with sliced peaches. The ferry will take you back to Positano (again for free) through 5 p.m.

Beyond Positano and just east of Laurito along the coastline, Praiano and Vettica are great lodging alternatives to more crowded and costly destinations. In this same area, dug between two towering walls of rock, sits Marina di Praia. You can land there in a dinghy or get there from the highway (be prepared for 10,000 steps) and head for Da Armandino (tel. +39.089.874087; open April-November). Marina di Praia is an old fisherman’s village known for its handcrafted, all wood gozzi boats. Humble, blue-eyed Armandino, who speaks impeccable English, will welcome you to modest tables that in a spot that was once a boatyard. It’s modest but delicious fare, including the morning’s catch, frittura (fried fish, shrimp and calamari), peppered mussels and delectable linguine with seafood. Save room for dessert.

Another smart lodging choice is Furore, a unique fjord just east of Praiano on the Salerno side. The local villa belonged to director Roberto Rossellini and actress Anna Magnani when they were romantically linked. Superbly renovated to keep the fishing hamlet intact, the Furore fjord has remained untouched. Breathtaking Locanda Ripa delle Janare is a lovely place to stay or dine, or both. The cuisine is simple and tasty, with specials that include homemade scialatielli pasta with seafood or mushrooms, freshly caught fish, and fine desserts. The boutique bed-and-breakfast rooms all have AC and a view.

Conca dei Marini, population 700, is another gem. The village acquired 1960s fame when Gianni Agnelli and Jacqueline Kennedy vacationed here. The best lodging solution is to rent a private home (and instantly become an extended member of a local family). Dine at on the deck of La Tonnarella (open April-November), which overlooks the beach. You can gorge on octopus salad, piennolo tomatoes and mozzarella, and fresh pasta with scorpion fish.

The best way to reach the Santa Croce beach near Amalfi is by sea. You alight from your vessel and weave to shore on narrow gangway. Otherwise there’s a steep stairway that connects secluded Santa Croce cove and its natural stone arch to the main road, some 400 steps above sea level. After a swim and a lazy snore under an orange umbrella, drag yourself to a table on the wood plank deck at Da Teresa (open April-November), where you’ll get a glass of wine and some peaches before a meal of homemade pasta, fresh seafood, fruit and garden vegetables from the owner’s property. No menu, just fine (and inexpensive) daily specials.

Further east comes bustling Amalfi, where visits to the Duomo and the ancient paper mills are a must. Pick up some exquisite Solimene pottery and head for quaint Atrani, one of Europe’s smallest municipalities. Rental rooms and informal, family-run trattorias guarantee a tranquil approach to life.

Take a day to visit picture-perfect Ravello to understand why poets and composers (Wagner was a huge fan) loved this romantic cliff-side town. Visit the terraces of Villa Cimbrone and Villa Rufolo, and enjoy a nice meal of seafood, cheeses and local specials at Villa Maria (open May-November).

Erchie is not an easy place to reach, which makes sitting on its pebble beach all the more satisfying. Once a fourth-century BC Saracen borough, Erchie, population 83, sits between two fortified towers just east of Maiori. Here you’ll find unspoiled Amalfi Coast fishing village life as it existed centuries ago. There are two lidos that serve simple meals and rent rooms in clean, unpretentious dwellings.

Finally, don’t miss the anchovy heaven of Cetara. Anchovy-skeptics will change their minds when they’re introduced to the food on which the town depends. Whether it’s Colatura di Alici (a wholesome fishy concentrate that exalts flavor) or oil preserved anchovy fillets, the little silver fish gets it just due. At Al Convento (open year round), host and master fryer Pasquale Torrente has elevated the humble anchovy into a highly sought after street food, transforming peasant food into an eating trend admired by haute cuisine chefs worldwide.