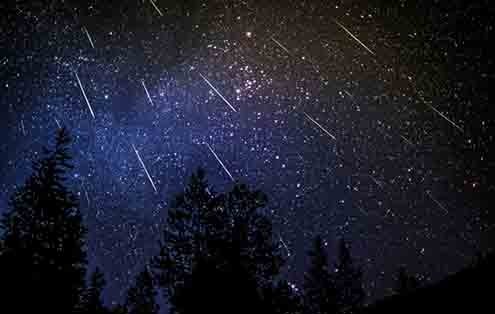 The Perseid Meteor Showers are a northern treat,
I

t’s been about a month since I closed up shop in Italy and returned to live in countryside New Hampshire after three decades in Italy.

Since I got here, both Italian and American friends have sent me a barrage of messages: “Come va, là in Trumplandia?”

“How does it feel to be home?”

“Do you miss Italy?”

I am ashamed to say I haven’t answered any of these well-intentioned inquiries. My excuse is that I haven’t been back long enough to judge. For now, my presence here feels like so many summer vacations I’ve spent in this same spot over the years.

But I have noticed a few things.

One day, the guy bagging my groceries in the local alternative food co-op saw me put a bottle of liquid dish soap in the same bag as the vegetables. He was horrified. “You aren’t putting the chemicals in with the food are you?”

American supermarket tomatoes are worse than Italian ones. Locally grown American tomatoes are better than any I’ve ever had in Italy.

Italian cherries are better than American ones. American potatoes are superior to Italy’s. Browsing an Alexandria, Virginia farmers’ market while in the Washington area I met an immigrant from Campania who makes very good mozzarella. Good to know.

My local lake has replaced the chlorine-filled Fascist-era public pool I depended on in Milan. My presence doesn’t seem to bother the loon family. My dog doesn’t seem to either. He waits anxiously on the dock, warming the towel for my return.

My new personal trainer (I have vowed to start my new life in shape) piles on the positives. No one in Italy would ever have called my wobbly squats “awesome” or rejoiced in my symmetrical arm strength (too bad I’m not a carpenter). Praise really works, but trying telling that to Italian schoolteachers.

When I asked my neighbor how he’d been, he replied simply: “Not as well as I could wish. I’ve got bladder cancer and the treatment is rough.” Simple American candor makes it surprisingly easy to speak openly and actually accord sympathy.

Internet service where I live is lousy and costs as much or more than my superior fiber-optic broadband in Milan. The local provider has a history of corruption and mismanagement that would surprise the Italians who assume that everything outside Italy is more transparent and efficient.

My recent application to purchase a big-city apartment was roundly rejected because I had no credit rating, having lived outside the U.S. for decades without an American credit card. My extenuating circumstances were dismissed (“That’s irrelevant,” I was told.)

In contrast, I easily filled out my application for Affordable Care Act-sponsored health insurance online. A mere two days later — a Sunday evening — a friendly woman named Cheryl called to go over the application. Again, my time in Milan worked against me: I lacked any documentation that would make me eligible to sign up outside the regular enrollment period. Cheryl’s “yes we can” response was positively Italian. “Just write a letter explaining this and I’ll put a note in your file.”

Aside from these adventures, it’s been a New England summer as usual, with fresh corn, lobster brought from Maine and the annual summer musical at the local opera house (“Kiss me Kate” this year). I watch my neighbors’ weekly display of fireworks — legal in New Hampshire —and follow the lake loons, praying their chicks will live to become adults.

Soon, mid-August’s Perseid showers will be on display. Not long after, Labor Day will end the American summer. The nights will get longer and call for heavier blankets. There will be no fireworks on the weekends and boast will be cleared from the beaches.

Once, these were the harbingers of my imminent return to Italy. This year, these portents of summer’s end will remind me I’m staying on.

When that time comes, my observations about the movements around me will no longer be quirky reflections on an annual vacation. When it finally sinks in that I’m here for good, I’ll probably become something like an ancient soothsayer. Every experience will be something to eviscerate and study, like animal entrails that carry meaning for the fate of my future away from Italy.

Only then — and it won’t before September — will I begin to have answers for my friends.