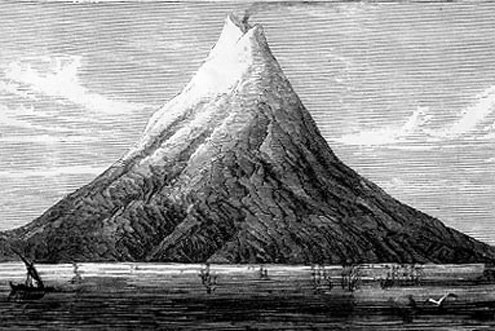 etey had a cure for tidal waves. Peanut butter. Put enough peanut butter in the “fizzues,” a cross between fissures and tissue, and the Earth would, said Petey, get all gummed up.

Petey’s idea wasn’t a lark. We’d just seen the movie “Krakatoa, East of Java,” and Mr. Kinney down the street (who, according to Petey, was a “fisyicist,” which was a kind of earth and star doctor), told us the world was made up of faults, which ran from Indonesia to California.

Petey thought a fault was a mistake, his mistake, so Mr. Kinney, to make him keep quiet, drew a bunch of lines in orange oil marker on the big map of the world he had on the wall in the basement. “This,” said Mr. Kinney, pulling the lines through the oceans of the East and the West, jiggling his hand like a great artist does, “This is a fault line.”

“When a fault line gets jumpy, “said Mr.Kinney, wiggling the marker, “it pushes up or out and then comes a volcano or a tidal wave.”

I wanted to know about how big the waves got.

“Pretty big, Son,” said Mr. Kinney, who opened a box called “Typhoons” and pulled out big black and white photographs of buildings under water, their beams sticking out at the camera like fractured anklebones.

“These, boys, are ones I took when I was in Japan, after a typhoon in 1954. See these waves? They consumed the shore.”

(This probably made Petey hungry, since he looked up at the kitchen just then; or maybe it’s when he got the peanut butter idea.)

“Sometimes,”continued, Mr. Kinney, “volcanoes you can’t even see erupts on the ocean floor, or there’s an earthquake, and then you get a soonahmee.”

Petey’s eyes got big, so did mine. We both thought Mr. Kinney would then take out a photo of some big slithery lizard like the one we’d seen in “Mothra” or “Artragon” or those other movies we weren’t supposed to see at the Art Horror Movie Palace on 14th street, but which we went to anyway by bike on our secret Saturdays.

TSUNAMI, and Mr. Kinney spelled it out on a little slip of paper that he handed to Petey. “It’s a Japanese word.”

Petey seemed disappointed but I wasn’t. I imagined the waves at the Atlantic beach fed some amazing food and growing and growing until they were a mile high and swallowed all of America. For years, I dreamed of tall waves.

How can water do any harm? Petey wanted to know.

Which is when Mr. Kinney got very quiet for a while and said nothing. Then, he picked up the orange marker again. I won’t forget what he said.

“Boys, imagine this. Imagine, say, that there’s this big, big volcano like the one you saw in the movie. Let’s put it here, under water, near Java, because there’s lots of activity there…”

“Activity means that the Earth is really hot and bothered there, OK?”

Petey got quiet again. Me, too.

“So,” continued Mr. Kinney, “imagine this volcano, which is like a long volcano, erupts all along this fault, this big long crack in the Earth, and makes the crack much bigger, and shakes all that water up, all those thousands of miles of water. Imagine that.”

Petey’s eyes got big. I got scared.

“The monster,” said Mr. Kinney, “is the way the water goes out from the spot where the Earth got shook up.”

“So what have we got? Look boys! We have Indonesia, which is nearby and has 10,000 islands. We have Thailand and Malaya. We have Burma. We have East Pakistan. But that’s not all, boys. This is a monster, as I said. It’s like a big footprint, as if the ball of the foot were in that spot where the volcano went ‘Boom!’ and the rest of the foot squashed out. So look further out, what do you see?”

We examined the pocked map and watched his vast circles.

“You have India. You have Ceylon. Why boys, you even have Madigascar and East Africa!”

But Africa is so far away, I moaned.

“What happens,” asked Mr. Kinney, sternly, “when you’re in the bathtub and you lift a little and then lean back hard into the tub, making suction with your body?”

The water spills forward and then out, I said. I lose my battleship.

“Right, Son, so imagine that. Imagine you’re lying in the Indian Ocean, taking the bath of your life, and you lean back. That’s what the Earth is doing. That’s what makes the wave. A lot of battleships get lost.”

I started to cry.

I remembered the time, the summer before, when the Atlantic undertow took me and my father swam out to save me. I still had nightmares.

I’ll get the peanut butter, he said.

Mr. Kinney put the marker down and smiled.

“Son,” said Mr. Kinney, vainly attempting to calm me down, “remember that what I’ve shown you both is all, well, very hypometrical,” or some kind of word like that that I didn’t understand.

When I returned home, sulking, and told my father what had happened with Mr. Kinneu, he said Mr. Kinney’s word had been hypothetical, — it was like a big maybe, he said — and he promised to speak to Mr. Kinney about not scaring little boys with tall tales.

Never in a million years, said my father.