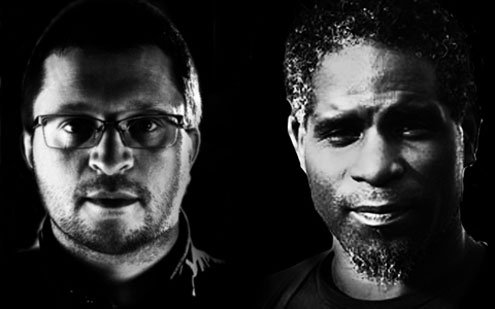 n lieu of paying the outrageous fares some airlines been asking in the wake of recent upheavals (here’s looking at you, Libya), I’ve decided to do my international traveling via airwaves rather than airways.

The namedropping may sound messy, but this shouldn’t come as a surprise given the two guys behind the boards. Between them, producer Mark Pritchard and vocalist Steve Spacek have covered more ground in more guises than the entire rosters of some labels. 93 Million Miles, in other words, is the perfect title for this album. You can hear everything.

From the footwork influences of “Out in the Street” to the eight-plus minutes of deep groover “Our Luv” to the Sun Ra-sampling “Light the Way,” Africa Hitech live up to their name by copping moves from Africa’s figurative and literal musical palette.

Some songs immediately jump out, but unlike the aggression of The Bug or Buraka Som Sistema, Africa Hitech can rein in their energy. The balance ought to bring fans from all corners of the globe.

Speaking of all corners, Russia is due. A country that once spread political ideology as a kind of hymn has been playing cultural catch-up since the dissolution of the Soviet Union in 1991. As Finn Cohen recently showed, things are changing.

The result is thoroughly contemporary. “Geek Rudohop” has the faint vinyl hiss and breezy string samples of a Flying Lotus production. “Hereinafter” starts off with a bass clarinet sample that turns into a coasting beat fit for any two-bit hack with a mic and a message. “Damage (Rework)” emotes like Burial with a bigger bounce.

With 14 songs in just under an hour — none overstaying their welcome — WOLS have made a statement. It’ll be interesting to see where they go from here.

Journeys have always been to the liking of Brooklyn duo Mountains. From their earliest self-released CD-Rs to a label deal and notoriety within the indie music community as a result of 2009’s Choral, Brendon Anderegg and Koen Holtkamp have always been on the move.

Their latest full-length, Air Museum (Thrill Jockey), is more polished than its predecessors, which is noticeable the further into “January 17” you get. Mountains have always been especially good at blurring the line between acoustic improvisation and electronics, but Air Museum feels like the product of subtle yet significant post-production. It is.

It’s also their first album in which acoustic instruments were not processed via computer. Instead, guitars, cellos, accordions, pianos, and more emerge through a mishmash of pedals, modular synths, and other techniques.

But most important, Air Museum still tugs at the heartstrings using simple, effective, cinematic melodies. The template may be the same — simple loop to start, long build, slow burn-off — but it works because Mountains make those simple, peregrine elements their own. They inhabit the sounds, create their own sonic geography, and travel it carefully. Air Museum shows they’re still wayfarers worth following.