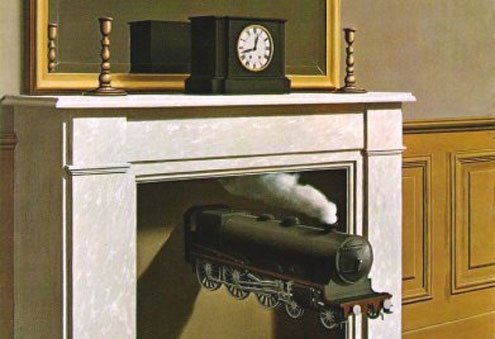 y early Rome years contained a caravan of eccentrics; people whose affectations straddled superstition and folly. When introduced into a more rational universe, that of working America, recalling their oddness made people uneasy — about me. I seemed not only foreign but alien. So I stopped.

But the people never went away.

First came the man who feared tunnels. This began after his mother died. He was 60; his mother 90. He came from an upper middle class family, had a wife who wore bulbous hats, and a daughter who painted pet portraits. They occasionally came to Rome from Florence by train, the mother in tow.

That ended abruptly with death, which he announced had “ended” his life. Tuscany’s fist-like hills are bored through with train tunnels, “galleries” they’re called, and the tunnel-fearer, bereft of his mother, refused to leave the house. “He’s afraid that if we go in one we’ll never come out,” his wife told my mother. He remained all but housebound for a decade. I never saw him again.

We often received visits from the lint lady. She lived in our neighborhood, had married a nobleman, a count, who died young. My mother always patiently warned me before her visits. Elegant and pretty, she would begin to discuss the country’s life and times only to stand up suddenly, excuse herself, and forage through the rooms of the house in search of lint, which she would point out as if having discovered stashes of gold bars. “Look, look here! You have some under the sofa!” My mother sat quietly as these hunts evolved. Satisfied, the countess would then return to her seat and continue the conversation.

Another regular visitor was the rain-drinker. A retired Sicilian physics professor (and inventor, he said), he told great stories about the meaning of light years and rustic life in the southern 1930s. All went well until it rained. If it did, he demanded to be escorted to the terrace, where without an umbrella he would look up at the sky and open his mouth. The explanation was simple. “Tin,” he said. “Tin.”

Son of gas — this was my name for him — was my mother’s accountant. He visited annually to review her poor finances but insisted first on entering the kitchen to check the gas valve. “Yes, good, it is closed tightly,” he’d announce. “I can come in.”

The stamp maniac, meanwhile, was thrilled to discover I was American. “This means you send and receive letters!” he said. Yes, I replied. “Please, give me the stamps you get with the heads of women; maybe you have the queen of a state or a historical figure.” I once gave him Betsy Ross.

The Panamanian ambassador to the Holy Sea refused to talk about church and world affairs unless was situated near a chest of drawers of a coffee table. “Let us hope the Russians don’t bomb us. Touch wood…” And he would do so immediately. “Let us hope the Communists don’t get anymore powerful…” Again, a slight knock. I offered to hold up a small wooden pencil box but he dismissed this as ineffective.

Many were the ash men. One was the acclaimed Ferrara writer Giorgio Bassani (“The Garden of the Finzi Continis”). He was a handsome, almost dainty man, polite if often peculiarly laconic. He disliked our sofa (“I don’t like its… consistency…”) and seemed to very nearly to fall asleep while he pensively held a cigarette, the ash growing into a black hump and breaking free.

Bassani’s celebrity presence often witnessed the appearance of the tall songstress, who punctuated all she said with sudden slivers of opera. Finished, she’d smile. “Puccini,” she’d explain. I felt like responding “tin.”

There was also the fake magician, a retired rightist politician who seemed to me to sum up the oddness around me. A charming middle-aged man with fine manners and a repertoire of unsubstantiated information about nations and planets, he claimed also to practice magic. “Shall I show you what I can do with an egg?!” I often offered to bring the egg, but everyone around the man considered such an “actual” gesture as impolite.

I later understood that the bringing out of the as-yet unbewitched egg would have been to challenge the magician’s assertions, which all knew to be fake. In that empire of tin, rain, ash, and gas, the bluster mattered ahead of than trick, which I came to know as a necessary Italian trait.