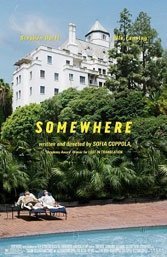 West Hollywood’s legendary Chateau Marmont is the makeshift home of Johnny Marco (Stephen Dorff), an established film actor whose unkempt clothes and attitude are costing him his dignity. Reckless, he oversleeps on the day of his high-profile press junkets and parties until he breaks his arm.

“Recovery” is spent with strippers and pain pills until 11-year-old daughter Cleo (a mature beyond her years Elle Fanning, younger sister of Dakota) shows up for weekend custody. Cleo ignites Johnny’s insecurity that despite wealth and boyish sex appeal, he’s still a loser. More than once he drives her around town in his Porsche, pretending the paparazzi are following them in a black SUV. She’s not impressed. “There’s a lot of SUVs like that in L.A., Dad,” states Cleo, matter-of-fact.

Of course the paparazzi aren’t following scraggly, non-photogenic Johnny. They never were. Even with a hit action film, Johnny isn’t a believable celebrity. He’s a hollowed corpse. Director Sofia Coppola (“Lost in Translation”) exploits him for what little he’s worth with spacious, uncut shots. Which might bore viewers to tears, except there’s something to be said for Coppola’s sleeping pill style. Real life doesn’t leave the boring moments on the cutting room floor. And so we endure Johnny’s pained gaze as he broods over a beer for minutes on end.

The acting masks some of the tedium. Dorff and Fanning make a darling pair, with Fanning more doting mother than alienated child. Her levelheaded Cleo seems blind to Johnny’s stardom — that’s the whole point. “Somewhere” is about her fight for Johnny’s fatherly attention, and Johnny’s reciprocal struggle to prove to Cleo (and himself) he’s more than an absent Dad. When Cleo’s mother abandons her, Johnny jets them to a film promo in Italy. They giggle through an absurd award show and eat gelato in bed (a touching homage to Coppola’s childhood with her own famous father).

All is right in the world until Cleo heads to summer camp. Johnny must face himself alone. Coppola doesn’t go easy on her down-and-out characters, and this time is no different. But be patient. Optimism pays off in the end. Winner of the 67th Venice International Film Festival’s Golden Lion award.