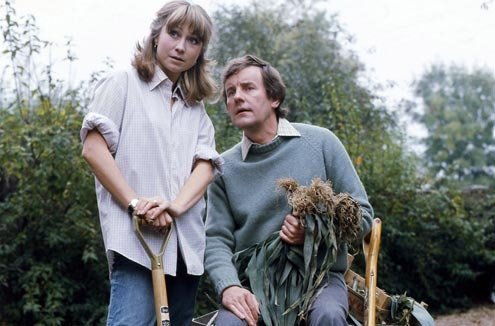 n 1976 John Seymour published “The Complete Book of Self Sufficiency.” At the time, we were busy chuckling away at Tom and Barbara in the sitcom “The Good Life,” watching the two of them struggle to establish a sustainable, self-sufficient lifestyle London suburb — to the horror of their neighbors.

A trend was born. For those determined to make their lives as difficult as possible, country life beckoned. Suddenly, the price of smallholdings in Wales shot through the roof, and the M40 was packed with optimistic couples heading for the hills “to try a spot of sheep farming.”

How they got on nobody knows, but one thing is certain: an awful lot of very bad homemade wine was made and consumed, probably wiping out a few lives in the process.

In 2002, two years before his death, Seymour’s book was republished and, guess what? A whole new generation was inspired to give it go. We have out own much-thumbed copy. But when I went to look for it to research this article I found it hidden in attic. And for good reason: following John’s advice is too bloody hard.

Oh yes, John made it all sound so easy. Nothing was ever too much trouble for environmentalist, agrarian and smallholder John. Digging out his dry toilet, plowing the fields with a horse, setting up a windmill, butchering a pig — and that was just in the morning.

After a delicious lunch of home baked bread, homemade cheese, home grown tomatoes (and, of course, don’t forget the chutney), washed down with fabulous home brewed beer, John was rejuvenated enough to shear a couple of sheep, build a movable hen house from fertilizer bags, and whip up a delicious carrot cake with his surplus eggs.

After supper (home cured ham with some freshly lifted new potatoes) he just had enough time to spin the wool so he’d be ready to weave couple of stylish book-bags the next morning before breakfast (dewy mushrooms, gathered while humming happily from the field, gently fried in home made butter on home made toast). This was of course before the real work of the day began.

And so it went for John.

Over the years, in our own Italian homestead, we’ve made number of attempts to imitate John’s easy-going heroics, only to be defeated over and over again by the weather, lack of proper equipment, thick clay soil, stubborn animals, lack of funds, and, well, just being a bit tired. Sorry, John.

John doesn’t mention in his book if he had children (he did, but he took to the land when they were older). We have five, and, more to the point, we live in Italy, a challenge that John did not face.

But let’s leave poor John alone for a moment. If you are thinking of giving self-sufficiency a go, you need to create a kind of checklist. Here are my top tips for success — or at the very least tips how to avoid inviting in some of the really big frustrations.

First, try to make as much money as humanly possible before you even start. Being poor and self-sufficient is, well, miserable. You’ll notice how many rock stars opt for the country life, and probably enjoy it. So, first make sure you have a couple of hit singles under your belt, or make a fortune on the stock exchange. Either way, all will be well.

John, it should be noted, was a BBC broadcaster who published 48 books over the years. “Complete Book” sales soared after the success of the TV show (both the show and the book became a national hits), so I gather John had enough to pay the gas bill when he couldn’t be bothered to get the wood in.

Second, get your living quarters to work efficiently. There is nothing more miserable than entering a cold house in which washing up is impossible and you can’t get a nice hot bath without too much of a palaver.

Third, don’t try to do too much at once. It’s so tempting to rush into lots of projects only to wash up on the shores of dejection with your garden looking like a junkyard.

If you follow these simple rules, especially the first one, downsizing into self-sufficiency can actually be a lot of fun. But if you can’t, just enjoy buying your fruit and vegetables at the market like everybody else. It’s much easier on the back.