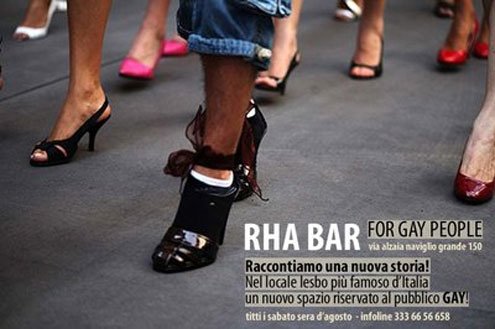 There are few openly lesbian hangouts in Italy's large cities.
&

#8220;Buon giorno, Mary.” I walk into “Bar Mary,” the coffee bar nearest my home. “Latte macchiato.” It’s the smallest bar among a large number that line our Milan piazza, but also one of the busiest. The coffee’s good, the prices are decent, it’s open early and late, but most of all there’s Mary.

“Buon giorno,” Mary smiles. She always smiles. This morning she’s wearing a bright pink top with sparkly decorations — very Asian chic. She waves to a passerby outside and they wave back and blow her a kiss. Everybody knows Mary.

Normally, Mary’s husband comes in for an hour in the early morning and disappears when he takes their two kids to school. The latte macchiato he makes is okay, nothing special, in sharp contrast to his wife Mary. To me, he’s a wet noodle. He never says hello; he never smiles. When he’s not serving coffee he’s plays video games behind the bar. He never makes conversation with the patrons. I try avoiding the bar when he’s there and apparently I’m not alone.

This morning Mary seems a little agitated. She turns toward the espresso machine to fix my coffee. She then turns back towards me.

“Can I ask you a really weird question?” she says.

“Sure, but not before my coffee,” which she serves me with a dusting of cinnamon and chocolate.

“Well, okay.” She laughs again. “Can someone turn into a lesbian?”

“But there’s this woman I really like. You remember the Philippine girl who was here in the bar yesterday.”

“I wait for her every day and I think about her all the time,” she says.

“That’s beautiful.” I grin. She looks like a teenager confessing her first crush. “Lots of women are attracted to other women. What are you so worried about?”

“But she’s a lesbian and I don’t know if I’m becoming a lesbian or not.”

“Hey, why label it? Just go with it and enjoy. Maybe it’ll lead to something physical or maybe you’ll just be like sisters.”

“You know I have a husband, right?” she said.

I think of Wet Noodle and shrug. “Well, you don’t really choose who you fall in love with,” I say. “Love just kind of chooses you and if you don’t follow through it’ll pass you by. Life’s too short.”

In Italy the possibilities for women to meet and interact openly are limited. In Milan, Rhabar is a great place along the Navigli. The Lelephant bar near Porta Vittoria is also friendly, though it’s not specifically lesbian. Gruppo Sci.G, the local gay ski group, has a few lesbian members, and there are usually one or two women with Gruppo Pesce, the gay swim group.

Many of my lesbian friends form tight social networks. My friend Chiara celebrated her 50th birthday recently with 10 of her women friends. They rented a private home o Ibiza and spent a long weekend, “just the girls.” Lesbian couples are often very private about their relationships. Laura and Rita have been together for as long as I’ve known them, almost 15 years. They work together and though everyone regards them as a couple, nobody speaks about it openly. When Rita was injured in a serious motorcycle accident it was awkward to reach out to Laura in sympathy without infringing on their privacy.

Sadly, the general logic suggests that if a woman doesn’t want to marry and bear children, she can always stay at home and look after her aging parents or join a nunnery. “Don’t even mention the ‘L’ word!” Silence is golden.

A few mornings later, I drop by Mary’s bar. Wet Noodle is not around. Good. Mary is beaming.

“You look very happy this morning,” I tell her.

“Last night I went out for drinks with her and we had a really good time.”

“Good girl.” I wink, take my coffee, and go out to the patio.