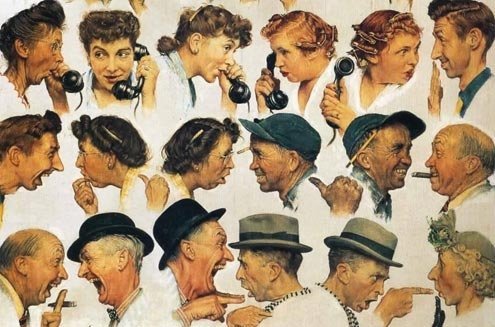 Gossip warns us to stay away from certain people.
I

heard it from Eduardo, who has a friend who knows it from someone who works in the same building as Alberto, even though she doesn’t know him personally. She said she heard that Alberto left his wife and two kids to shack up with some foreign man.

That would be me.

Oh, and there’s more to the story.

Other reliable sources say they know someone who knows someone else who has seen Alberto involved with a young male technician at work. They go for coffee together almost every day. That would be our friend Gigi.

Does it stop there? Of course not.

According to someone else, Alberto is having an affair with a new guy who just joined the staff. They’ve been seen having coffee together and sometimes even lunch in the cafeteria — in plain sight. The worst part, says the same someone else, is that Alberto still has the nerve to still wear his wedding ring!

Gossip informs us about the sexual behavior and moral transgression of others and teaches that non-conformity leads to social decay. It warns us to stay away from certain people, regardless of how nice, interesting, or competent they may be.

In this case, the embedded message is that homosexuals are opportunistic predators who destroy “normal” families. Beware!

Most everyone has been the victim of malicious gossip at one time or another.

I remember a freshman girl in high school who was supposedly caught giving her boyfriend head. From then on, only the teachers seemed to remember her name was Cheryl Barker not “Blow Job Barker.” By the time we graduated, the story had somehow evolved to include a horse. The boys mocked her and the girls stayed away from her, lest they be tainted by association.

Gay people are particularly vulnerable to gossip. The “Don’t ask, don’t tell” approach sets up a perfect storm. In Italy, where most homosexuals or bisexuals try to hide their sexual preferences for fear of retribution or being ostracized, the handiwork of gossipers spoils nascent friendships, ruins reputations, and hurts people in both their private and professional lives.

Slings and arrows are thrown in abundance but rarely does the target have the opportunity to identify or confront the attacker. Javier, my ex-boyfriend in Toronto, was once the object of malicious gossip, but in this case we both knew where it was coming from. And Javier, with his thick Mexican accent, confronted him smartly: “Movie stars and politicians pay a lot of money to get people to talk about them but you’re doing it for me for free. Gracias.”

The only defense I’ve ever found against a gossiper’s guerrilla warfare is honesty. I don’t feel the need to tell everyone I meet that I’m gay. But if a natural situation arises, such as a person sharing the mundane details of their private life, I do my part and share mine.

The sauna lizards, the old guys who live at the gym but never work out, sometimes ask me what I like most about living in Italy. I give them the pat answer: food, culture, scenery. “Hey, and what about the beautiful women?” one of them asks enthusiastically.

Is this some kind of test?

“Yes,” I reply. “Sophia Loren is one of the most beautiful women in the world.”

They all agree and I pass the test.

Then I add, “But actually I came here for an Italian man.” Oops, did I fail the test?

At the pool, I coach Ricky and Mikey in swimming. They’re two of the younger guys and I can hear and see what’s going on. I’ve seen an eye roll and heard a titter or two.

But I remember what a wise old drag queen once told me: “Honey you got two choices in life, you can live your own truth or you can live someone else’s lies. Both come with a price. My truth just happens to cost me a lot in foundation and eyeliner.”