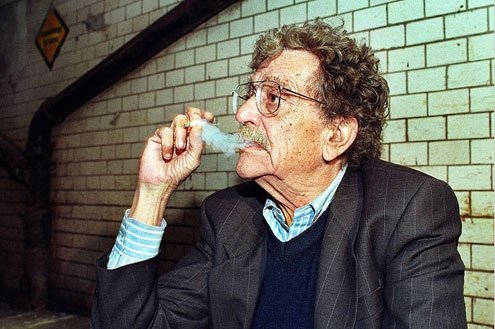 In these pieces, written over decades, his language and passion rings fresh as tomorrow.

Listen to the second KV in this collection. A 2007 speech, read by Mark shortly after his father’s death. In it you can hear the spot-on, outrageously funny social satire that was his signature attack, to the end: “There’s good news and bad news tonight… The bad news is that the Martians have landed in Manhattan and checked in at the Waldorf Astoria. The good news is that they only eat homeless people of all colors, and they pee gasoline.”

The man’s laid-back-Hoosier, and shrewdly inimitable voice crackles live off the page. Thirteen additions to his anti-war crusade. For opener there’s the original letter from PFC Kurt Vonnegut to his family, dated May 29, 1945. “Dear People: I’ve been told you think I’m dead. That leaves a lot of explaining for me to do.” It became his life’s work.

No surprise, then, that “Armageddon” is a mixed bag of genres. Has to be, to reflect KV’s half-century of chameleon narrative performances. Like them, it weights to his most-acclaimed, brisk, knife-to-your-throat “fictions.” About the author’s POW experiences during and after the tragic 1945 Dresden fire-bombings. The year that city of art, with no tactical military value, was razed by Allied bombers. This destruction was his pivotal life moment. He never forgot the havoc, nor forgave it.

In his life opus there was always a corner, a slice, or more, about the events of Dresden, when 130,00 non-military people, mostly women and children, were roasted alive and buried in rubble. And, yet, Vonnegut doesn’t deal in blood and gore descriptions. No screams, no screeds. Just the facts, the simple horrible facts, are accusation enough.

In many ways this volume micros and parallels the larger Dresden account in his iconic 1969 novel “Slaughterhouse-Five.” Yet through Vonnegut’s fictional acrobatics, it reads as brand new fiction. And no small pleasure lies in the astute selection of Vonnegut’s poster-drawings to launch each work.

Both “Slaughterhouse” and “Armageddon” hit on lying governments, cynical commanders, cheating soldiers, and the senseless deaths tolled in war. Both detonate the narrative line. And reader complacency. Here’s the non-fictional experience that launched both of these fictions:

“Slaughterhouse” narrator Vonnegut/Billy pilgrim survives the Dresden fire-bombings when he and the rest of his POW work gang take refuge in the unusually deep storage cellar in a meat packing plant, “slaughterhouse number five.”

For the novel, these war experiences unhinge Billy, who becomes “unstuck in time.” A gimmick that lets KV punctuate Pilgrim’s life progress with death’s casual irony, and with repeat flashes of the Dresden horrors. The massacre. After each death, civilian or military, third person narrator Vonnegut suddenly and directly enters the tale, commenting, in his own laconic voice: “So it goes.” It became a generational catch phrase, during the Vietnam War.

N.B: our current “Retrospect” publications have no dated attributions. Fair enough. Since Vonnegut saw human history as a constant replay of the Armageddon fallacy. Having survived one such “finalizing” event, he offers a full re-take in this volume’s splendid “Wailing Shall Be in All Streets”:

“I felt then as I feel now, that I would have given my life to save Dresden for the World’s generations to come. That is how everyone should feel about every city on Earth.”

Still, should anyone hold to calendar dating, it’s good guess many of these short works were repeatedly pink-slipped-before major fame arrived with “Slaughterhouse.” For Vonnegut himself often and loudly complained that publishers had refused his early stories. They said no one wanted to read about Dresden. That stuff was over, done.

But Vonnegut knew Armageddon was ever in the air. His final fiction on that battle is placed here as the book’s last and title tale. It’s a bitter, laugh-out-loud fable about defeating The Devil. Whatever the cost in human lives. For isn’t it common knowledge that he just can’t be driven out of some humans, unless they’re “killed in the process.” More deaths.