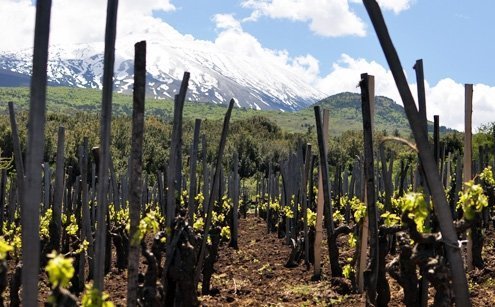 A 130-year-old vineyard is like a 90-year-old person," says I Vigneri vineyard manager Maurizio Pagano. "You must respect it as you respect your elders."
W

hile most of the world’s popular wine regions are steeped in decades if not centuries of history, the roots of Mount Etna’s wine production are even deeper, predating even the Roman Empire. Its first wine makers were the Greek settlers who occupied the Sicilian island some 2,600 years ago. Out of that intricate and often tumultuous past came a steady tradition of grapes and wines, albeit most of it produced on the fringes of the Italian winemaking scene.

These days, however, a number of young winemakers are working hard to revitalize Etna’s distinguished heritage and generating considerable buzz as a result. Undeterred by the looming presence of Europe’s tallest active volcano and the labor-intensive demands of terraced vineyards, a number of ambitious and dedicated vintners are embracing local agriculture and customs to produce fine wines.

It’s hard to pinpoint just what gives food-friendly, versatile Etna wines such a strong personality. The volcanic soil and extraordinary climate are certainly essential ingredients. Sun, wind exposure and altitude all have an effect on wines whose taste and characteristics can actually vary depending on which square meter of vineyard they grew from. Etna’s uniquely crooked alberello trees – closer to squat, shrub-like vines — sprout from every kind of soil, but all of it is rich in volcanic iron. Some trees are planted in rocky wedges, others in stony or porous pumice, and still others in black sand.

Etna reds are often compared to Pinot Noir. The primary variety is Nerello Mascalese, which is usually blended with Nerello Cappuccio. The result is a pale ruby-colored wine with strong fruit flavors (black cherry, strawberry and currant). Its fresh acidity and pleasant tannins make it enjoyable when drunk young but also well suited for aging.

The principal white is Carricante, usually blended with other local varieties such as Catarratto and Minella. Flavor ranges from the mineral to the fruity and the more full-bodied. Diversity is what makes Etna so exciting and refreshing.

Though family-run enterprises are more common than larger wineries, the region has a little of everything. There are elegant wines from historic vineyards as well as youthful small boutique wineries. I recently spent time with local Etna winemakers. Here are five wines from five winemakers you should jot down:

— Benanti Many writers hail Giuseppe Benanti as an Etna pioneer. He had the foresight to invest in his family vineyards in the late 1980s, focusing on local grape varieties. He and his sons produce elegant wines. Benanti, Pietramarina, Etna Bianco Superiore — a gorgeous white made from 100 percent Carricante — is my recommendation. Fresh, bright and floral, it goes well with all simple fish dishes or stuffed calamari.

— I Vigneri Salvo Foti and I Vigneri are the benchmarks for traditional farming and organic viticulture. “A 130-year-old vineyard is like a 90-year-old person,” says vineyard manager Maurizio Pagano. “You must respect it as you respect your elders, not forcing it to be something that it is not but appreciating it for what it is.” The light-ruby tinted rosé I Vigneri Alnus Etna Rosato 2012 is vibrant with red fruit aromas and flavors (think strawberries and raspberries). It’s an intriguing wine that provides lovely accompaniment to salami and cheese.

— Vini Biondi The Biondi family began making wine in the 19th-century. In 1999, Ciro Biondi and his wife Stef decided to revive vineyards badly damaged in World War II fighting. Biondi, San Nicolo, Etna Rosso is a red made predominantly from Nerello Mascalese. The grapes used to produce San Nicolo, Etna Rosso come from the Contrada San Nicolo, once owned by Ciro’s great aunt Angelina (she died at age 100), a feisty, single, independent woman when such female character was unthinkable in “polite society” — in Italy or elsewhere. This bright red wine reflects her personality, fresh and fragrant with flavors and aromas of black cherry, raspberry and other fruit blossoms. It’s perfect with oven roasted fish or aged cheese.

— Vini Scirto Giuseppe Scirto and Valeria Franco grew up in villages at the foot of Etna. Giuseppe spent summer vacations with his grandfather and learned to grow and care for vines and grapes that later became the vini sfusi, or bulk wines, that sustained the family through the year. Both Giuseppe and Valeria attended the University of Catania and worked in the city until deciding to return to their wine roots. Mindful of nature, they began making wines (carricante and nerello mascalese) that reflected their spirited and ambitious personalities. Ideal with grilled sausages or pasta with meat sauce, Vini Scirto, A’ Culonna, Etna Rosso is a medium-weight wine with delightful acidity and red and black fruit flavors.

— Vino di Anna Anna Martens began her Italian winemaking career in Tuscany before coming to Sicily in 2005. She and her French husband Eric first produced Vino di Anna in 2010. Hers is a hands-off philosophy. She uses natural yeast, little sulfer dioxide, and unconventional fermentation vessels, including a Palmento (a traditional Etnean winery) and Georgian Qvevri (a traditional Near Eastern amphora lined with beeswax). Vino di Anna, Palmento Rosso 2013, made in a 250-year-old Palmento, is a fresh and full wine with red fruit aromas and flavors (cherries, strawberries and currants). Savor it with fresh cheese or a simple plate of pasta.