Some good news about a bad guy 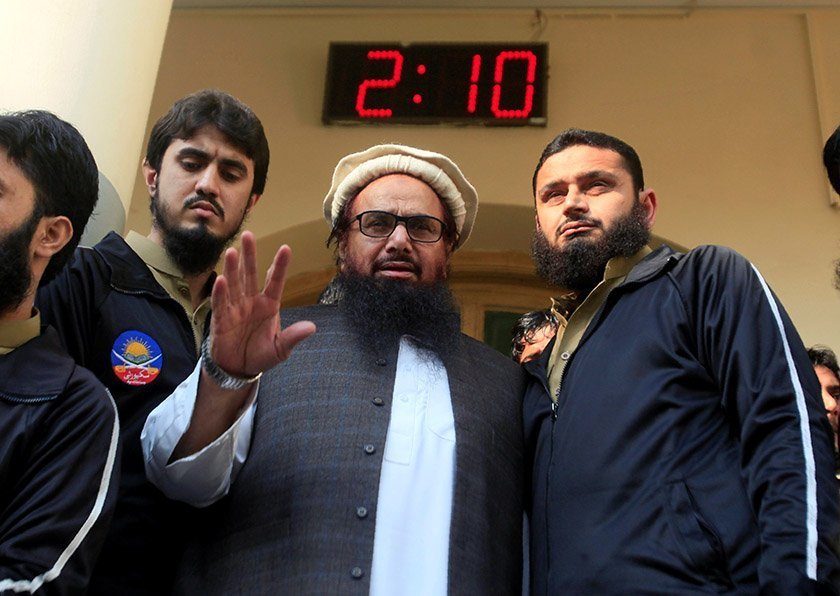 hile the world has been focused on responding to the spread of the coronavirus and short-lived Afghan peace deals, something actually positive happened in Pakistan. In mid-February 2020, Hafiz Saeed was convicted of financing terrorism and sentenced to five and a half years in prison. This outcome, as unexpected as it is welcome, brings a pause to Saeed’s 30-year campaign of murder in South Asia.

If you’ve never heard of Saeed, consider yourself lucky to have never had occasion to learn about his deadly deeds and crimes against humanity. For South Asia watchers, Saeed is notorious and has been the focus of counter-terrorism efforts almost from the moment he came to prominence in northwest Pakistan in the 1980s.

Saeed is the founder and chief of Jamaat-ud-Dawa (JuD), an ostensibly charitable organization that operates primarily from the northern provinces of Pakistan, including Pakistan-administered Kashmir. At first glance, a charitable organization hardly seems like a threat to national security, let alone international security. In fact, millions of people in Pakistan view JuD positively and rely on the network of health and education facilities that it has set up across Pakistan. Many of those people will undoubtedly denounce the crackdown on Saeed and JuD.

The problem is that JuD has long been the front organization for Lashkar-e-Tayyiba (LeT), the largest and most active militant terrorist organization in South Asia. This group was also founded by Saeed, and he continues to run almost all aspects of the organization from Pakistan, with LeT offices often co-located with those of JuD. For all of JuD’s legitimate charitable work, its biggest “charitable” recipient by far is LeT. Each year, JuD funnels hundreds of millions of dollars, raised in a variety of ways but laundered clean by charity’s veneer, into LeT coffers.

If you’ve never heard of Saeed, consider yourself lucky to have never had occasion to learn about his deadly deeds and crimes against humanity.

For decades, LeT has used this funding not only to train and equip militants, but also to fund, organize, and carry out numerous terrorism operations throughout the region. In the 1990s, adhering to a sectarian Islamist ideology and acting with the implicit approval of Pakistani security services, LeT focused primarily on cross-border terrorism in Kashmir. During this time, militancy surged in India-administered Kashmir as thousands of LeT-trained fighters infiltrated the border and carried out terrorist attacks on Indian interests.

Despite its formal designation as a terrorist organization by the United States, Great Britain, Australia, and the United Nations (among others) in 2001, LeT continued its rampage. During the 2000s, LeT expanded its focus and reach, motivated anew by the presence of western forces in Afghanistan and the blossoming of a strategic partnership between the United States and India. Rather than a deterrence, these developments provided LeT with additional targets. As its attacks outside of Kashmir increased, so did its audaciousness. In this era, LeT was responsible for such high-profile attacks as the assault on the Indian parliament in December 2001, the serial bombings on Mumbai trains in July 2006, and the bombing of the Indian embassy in Kabul in 2008.

The November 2008 terrorist attacks in Mumbai were the bloody feather in LeT’s militant cap. According to public reports and investigations, LeT planned the infiltration of Mumbai, trained the attackers, and carried out necessary logistics and organization, all funded by JuD and personally approved by Saeed. On phone calls intercepted by foreign intelligence organizations while the attacks were in progress, Saeed can be heard chillingly giving directions to the attackers and micromanaging the assault, even ordering the execution of hostages.

The list of LeT attacks in the region goes on and on. In the past three decades, LeT has been responsible for more terrorism activity, bloodshed, and civilian deaths in South Asia than any other single organization, including al-Qaeda, the Taliban, and the Islamic State. Almost all of this has been the brainchild of one man – Hafiz Saeed.

As devastating as the 2008 Mumbai attacks were, they did represent a turning point in the struggle against LeT and Saeed. Western governments were newly awakened to the danger that Saeed posed and put enormous international pressure on the Pakistani government and military to rein in both Saeed and his organization. As might be expected, the Pakistanis resisted and obfuscated.

Since LeT’s inception until 2019, Pakistani military, intelligence, and law enforcement all looked the other way, often encouraging and guiding LeT’s activities in Kashmir. Counterterrorism experts have long believed that Pakistan’s military intelligence wing (known as Inter-Services Intelligence) even had a hand in the creation of LeT, which it supported as a means of fomenting unrest in Indian-administered Kashmir while keeping its own hands clean. But the Mumbai attacks demonstrated to the world that the Pakistani military no longer had sufficient influence over LeT, if ever it did.

The 2006 Mumbai attacks proved that the Pakistani military no longer had sufficient influence over LeT, if ever it did.

Yet this was not enough to spur the Pakistanis to action, and the government tried every trick to superficially appease the West and alleviate its pressure. Several times, Pakistani authorities arrested Saeed to much international fanfare, only to quietly release him a few months later. On occasion, they would place him under “house arrest,” which too often meant that he was restricted in only physically, retaining full communication and thus the capability to run JuD and LeT. Too many times, flimsy government charges were thrown out by domestic courts. As recently as July 2018, the Pakistani Supreme Court upheld Saeed’s right to continue to run his “charitable” organization. For western governments, there was perhaps no better definition of frustration than continuing to pursue justice against Saeed.

To their credit, western governments, particularly the United States, did not give up. Understanding the blood on his hands and the danger he posed to stability in the region, they doggedly kept the pressure on Pakistan until it no longer had any choice. The logjam was finally broken by the Financial Action Task Force, a global money laundering and terrorist financing watchdog. In February 2019, the Task Force warned Pakistan to make progress on its commitments to curb terror financing or risk being placed on its “gray” list, which would raise the cost of doing international financial transactions for Pakistan. That same month, the government announced a ban on JuD. In July 2019, Saeed was arrested and the assets of JuD were seized. In February, Saeed was finally convicted and jailed.

Of course, Saeed’s imprisonment by no means solves the problem of terrorism in South Asia as there is still much work to do be done, not the least of which is making sure he stays there and is not released anytime in the future. More broadly, neither western nor Pakistani governments can rest easy. Beyond Saeed, LeT and other smaller terrorist organizations remain active.

Still, this is an important blow to the region’s terrorist network and is a giant leap in the right direction. Much like al-Qaeda was decimated by the killing of its founder, removing Saeed will hopefully lead to the demise of LeT. At long last, Hafiz Saeed is in jail. For the sake of humanity and South Asia’s future, let’s hope he rots there forever.