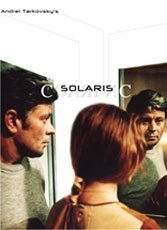 What is most shocking about the deeply spiritual “Solyaris” is that the anti-religious Soviet government allowed it past the censors. Based on Polish writer Stanislaw Lem’s novel of the same name, director Andrei Tarkovsky’s 1972 adaptation dodges the hard science fiction of the book to tell a story that is, instead, all about people. The film’s remote and poetic visuals (sublimely shot by cinematographer Vadim Yusov) reveals how the emptiness of outer space can make people profoundly alone and without recourse.

A research team has been circumnavigating the distant planet Solaris for years searching for clues into its puzzling nature. Soon, each crewmember flounders helplessly under the planet’s spell. Psychologist Kris Kelvin (Donatas Banionis) arrives to assess the crewmembers’ malaise, but quickly becomes another captive. Once on board, he is confronted by startling vision of his dead wife, the svelte and angel-faced Hari (Natalya Bondarchuk), who committed suicide.

At first Kelvin understands that Hari is just a hallucination, a walking, talking vision. He tries to expel her from the ship, but she hauntingly returns. Her presence marks the moment at which memory leaves truth behind and conforms instead to a personal reworking of the past, now tailored to fit the present. Finally forced to confront the reality of his wife’s death, Kelvin decides instead that she’s alive.

Like the crew, he’s overcome by a memory of love and finds himself at the mercy of Solyaris, eternal prisoner of a past he thought he’d buried. His private thoughts, his fears and love, are gradually absorbed into the planet’s bewitching chemistry. By the end, Hari-as-vision and Hari-as-human are nearly at one. What Kelvin does put behind him is Earth, and where he finds home again depends on the viewer. Steven Soderbergh and George Clooney teamed up for “Solaris,” a 2002 remake.