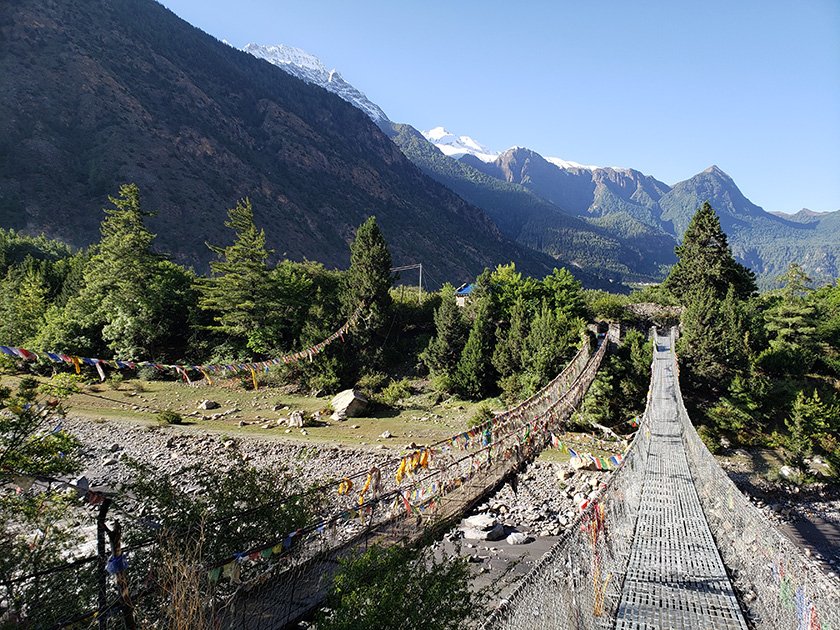 This is the way that leads to the village of Marpha. in Mustang.
S

ilence is one of the hardest arguments to refute. • American writer Josh Billings

The first thing a traveler notices in the Himalayas in Nepal is not mountains, but silence. Where humankind isn’t, silence is. For a person usually immersed in the world’s industrial cacophony, this is shocking. Here, a stream is as loud and as insistent as a railroad.

Nepal is a country about the size of Iowa in the U.S. But while the state of Iowa has about one tenth the population of Nepal (three million versus thirty million), Iowa has a GDP nearly twice the size of Nepal’s.

To visit the mountains, travelers head north from two main cities, Kathmandu and Pokhara. I chose Pokhara in the western province of Gandaki, as it’s smaller and more manageable.

Mustang is one of eleven districts in Gandaki, home of one of the world’s tallest mountains, Dhaulagiri (about five miles high). Citizens are free to move about but travelers to Mustang must obtain special permits, about $100 dollars for Lower Mustang and $600 for Upper Mustang. (For perspective, the average Nepali, according to the government earns $1.90 per day—and according to the average Nepali it’s way less than that.) The fees sustain government management and, for Upper Mustang, a mandatory guide.

The solitary road from Pokhara to Mustang, often a one-lane affair, is fodder for nightmares. My 90-mile trip took ten hours through rain, on a road paved in short patches, mostly in towns. Make no mistake, though, it is primarily dirt and mud.

Poorly carved into the sides of mountains, our path snaked along the Kali Gandaki River. Twice during the trip passengers abandoned the bus while the driver made deathly runs up sodden hills in what seemed to be vain attempts to crest a ridge. We evacuated in case he tumbled over. Fewer dead.

More routinely that the government admits, buses tip down the mountain killing most everyone on board. Sometimes it’s a private jeep avoiding a rockslide that slips. And if the road doesn’t kill you, the weather might. On May 28 of this year, the daily flight from Pokhara to Mustang’s capital, Jomsom, fought its way through storm clouds, only to fly into a mountainside killing all 19 passengers.

The possible romance of an Indiana Jones adventure is framed by mortality. People seem to forget that.

In Mustang, I stayed with my friend Zenden and her family. They live in the Tibetan refugee camp outside Marpha. According to unreliable estimates, when China annexed Tibet in 1959, two million Tibetans sought refuge in Nepal.  Refugees have residency but never citizenship, which means it is unlikely that they and their children and children’s children will leave Nepal. They have no passports.

Their home has four rooms — two for bedrooms, one small kitchen with propane gas, and a separate squat toilet outside. Not long ago, they installed running water, a great improvement.

During my stay we traveled too many places to cover here. Also, what it feels like to be there challenges the best descriptions. I will fail trying. 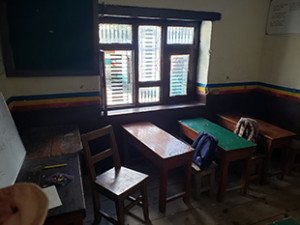 With a population density of ten people per square mile, Mustang makes escaping humanity easy. I walked one mile from Zenden’s home and thereafter did not see a human being for four hours. The sense of that solitude, what it means to those who live there, makes poverty bearable, for here the world’s definition of poverty breaks down. They are impoverished monetarily, but still hold onto riches.

Outside Zenden’s door cascade a dozen waterfalls from the granite mountainsides, summer melt from the snowcaps above. The one nearby road is usually barren. Few people have cars. Some have mopeds, which to my surprise and delight use the passenger bridges over river valleys.

Zenden’s daughter Menkot and her best friend Tensin are inseparable. They run games through camp alleyways any hour they are not at school. I spent time teaching there, students eager to hear about the outside world yet proud of what they accomplish so far away from everything.

Their long, rigorous classes teach them three languages, Nepali, Tibetan, and English. Their bare classroom is a stark reminder that for most of human history modern tools like computers and televisions played no role in education. Geography, science, math — the children do them all the old way, pencil and paper and a lot of sharing ideas and conversing. Students’ respect for teachers is palpable.

The camp holds about three hundred refugees. I saw not a single incident of anger or bullying. This is not to say there isn’t trouble, only that it is rare. Maybe it’s because the camp is too small to hide from your neighbor. Poverty and close quarters force reconciliation and patience with one another.

They go into the city when necessary, each traveler with a list of needs from others, the return buses’ roofs teetering with mountains of supplies.

Then there is nature. The mountain paths are meandering. Yaks graze freely on flatlands. In the distance the occasional hut is backstopped against sheer gray walls. In greeting, people smile and place together their hands in prayer. “Namaste.”

Monasteries on mountaintops, statues of Buddha clinging to cliffs, prayer flags snapping in the high mountain winds, and… nothing. Silence and peace and the sound of one’s own breath gasping for oxygen in the rare air. It is a place to live, and die.

Zenden and most like her would not leave if they could, in spite of the struggle. Some months, especially now during the Ukraine war, propane is rare and dear. More meals are served cold. Food can be sparse and everyone makes the best of local root vegetables pried from hard earth. The ten-hour journey to the city with “everything,” Pokhara, is death-defying and exhausting. They go only when necessary, each traveler with a list of needs from others, the return buses’ roofs teetering with mountains of supplies.

It is an existence which few in the world would aspire to but most living it would not give up. Only people who visit will understand why.

In this increasingly insane and bitter world, I suggest you do.