Solidarity from up close 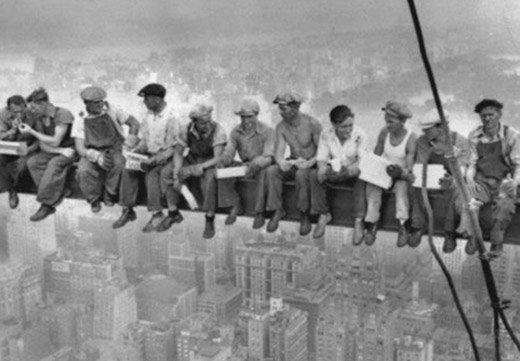 I joined the carpenters’ union as a first-year apprentice in 1971. My first task on the maintenance crew at the Time & Life Building in Manhattan was to cut a piece of Homasote (fiber board) for a bulletin board. Not even real construction, but I still managed to stab myself in the thigh with the sheetrock knife. The boss sent me home for the day to get a tetanus shot.

A few days later, I was doing a floor stop installation (it keeps a door from swinging too far) when the bit of my Yankee screwdriver unexpectedly flew out of the tool, narrowly missing the head of the assistant foreman. They took tools with springs away from me too.

My next assignment was to go with a kid named Eric up to one of the floors where the laborers had demolished an office. We were to pick up material to be reused on a future job. This office was divided by prefab units known as Detroit Partitions, which consisted of extruded aluminum posts supporting fabric and insulation covered panels.

We went about our job, sensibly avoiding all dangling cables.

Eric and I were supposed to go around the floor, collecting posts on a dolly and take them on the freight elevator to a basement storage room. Seemingly safe enough, even with my predilection for impaling myself or attempting to make myself blind through the use of ballistic screwdriver bits.

When we got up to the floor in question, there was one other worker in the post-apocalyptic scene, a laborer, who was engaged in a strange activity. The guys who had gutted the office had taken the light fixtures out of the ceiling, leaving the cables that powered the lights dangling. There had been hundreds of fixtures, so there were hundreds of cables with bare copper ends hanging down. This laborer was going around the floor with a ¼-yard dumpster and a small sledgehammer, carefully grasping each cable with one hand, laying its end on the edge of the dumpster, and decapitating it by hitting it with the hammer. Like killing venomous snakes.

The point of this exercise, he explained, was that there was no way to tell whether the 480-volt cables were live or not. But once he had short-circuited them by cutting them on the edge of the dumpster, they were dead for sure.

We went about our job, sensibly avoiding all dangling cables whether the laborer had already de-energized them or not.

The posts we were collecting were 10-feet long, and about 1.5 inches square in cross section. Each one weighed about 15 pounds. We were determined to do our job as efficiently as possible, so we loaded as many posts onto the dolly as we could. We stacked up about a ton of the posts on the dolly, which was designed for a maximum of 500 pounds, and, proud of our enterprise, moved the thing out to the freight lobby.

The elevator operator took a look at us and our freight, removed himself, and his milk crate, and his Racing Form, and his Tareytons to the far end of the lobby, and kept a wary eye on us as we attempted to turn the dolly so we could roll it onto the elevator. Some combination of the sheer mass, its high center, our inept application of force and balky castors resulted in the whole thing overturning on the floor of the lobby with a crash you could have heard on Jupiter.

I got a scratch on my arm from trying to stop the load from going over, but my partner danced neatly out of the way. The elevator guy, walking back to his cab, remarked, “Nice fucking footwork,” to Eric and departed.

The guys hung around for a few minutes, cleaning up the mess we had made.

But there were other construction workers on the floor, and almost before the echoes of the crash had died down, several of them arrived at the lobby in a dead run to find out what had happened. I will never forget the first one to arrive. He was Al the carpet layer, in his late forties, I would guess, balding, and bowlegged from having worked on his knees for decades. He was wearing dirty khakis, kneepads, glasses, and a thin gray t-shirt stretched like a balloon over his belly. He had sprinted down the hall so hard that he had to grab the door frame to bring himself to a stop.

Then he bent over with his hands on his knees, gasping for breath. “You fucking guys,” he said, when he was able to talk. “You couldn’t load any more metal on the fucking dolly?”

By then, more guys had arrived, and they hung around for a few minutes, cleaning up the mess we had made.

What struck me about the moment was that all of these men had heard that calamitous noise and had run toward the sound to make sure one of their own was not in need of help. I didn’t know any of them. I had never seen anything like this in my life. I was amazed by the demonstration of solidarity, but as the experience sank in, a little daunted as well. I had become part of a tribe that would expect me to run to their aid as unthinkingly as they had run to mine.

I didn’t know, at that point, whether I had it in me to hold up my end of the bargain.

In the end, I spent more than two decades as a construction worker. I held up my end. That solidarity in the face of danger, that sense of belonging with the people I worked with is still the thing I miss like fire, 30 years since my last day of work on a building site.