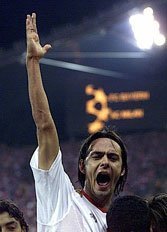 efore I met Fabio, one of my dating criteria was to find a man who loved sports. There was something just so sexy about going to a sports bar for beers and wings with a guy to watch “the game.” Looking at him yell passionately at the TV screen or chant at the stadium seemed so… so… so manly. Then I went Italian. To say Italian men take sports, or calcio, seriously is an understatement. An Italian male friend once listed his important things in life in the following order: “First, calcio, then mamma, then my girlfriend.” Of course, I didn’t know that at the start with Fabio. It was all coccole, flowers, and romantic emails. I was swept off my feet. Then came the soccer season. I recall lying in bed one morning tell-ing Fabio about a dream I’d had of a romantic getaway in Venice. I asked if he remembered his dreams, hoping I was in them. He smiled gently; yes, he remembered his dreams: “Sogno sempre che sono Pippo Inzaghi e che faccio mille gol per il grande Milan!”

Fabio is a fan of A.C. Milan, which meant his girlfriend (that would be me), would become a Milanista. Since I wanted us to have a common bond, and since there’s little on TV but soccer and half-naked women, soccer it was. The first game I watched was at a centro sociale in Tiburtina in Rome. OK, seriously, I was the only girl. Each room played a different game. And here comes the best part. I hear Fabio ask, “Scusa, ma dove sono i Milanisti?”

Apparently, for every game, rooms were allocated depending on team loyalty. God forbid we should have to sit next to those damn Juventini or Romanisti. I admit watching the game together was fun, though Fabio sensed my newfound love affair with soccer wouldn’t last. He was right, but that was because watching Milan wasn’t enough. We also had to follow Juventus, Inter and the other big games to see how those results would affect Milan in the overall standings. Then came part 2, sitting through the wave of sports shows: 90 Minuti, Studio Sport, Controcampo and Il Processo di Biscardi (nearly as scary as Jerry Springer).

It also helped praying Milan would win, because Fabio’s mood depended on it. I remember one night Milan was losing to Parma. I went into the living room to speak to him. Mistake. He barked, “Amore, non posso parlare adesso. Il Milan sta perdendo!”

Um, OK. So, out I went to do some grocery shopping. Returning, he asked me where I’d been. I explained. Then, he turned nervously toward me and said, “Senti, ora il Milan sta vincendo. Però, se il Parma fa un gol devo mandarti fuori a fare lo shopping ancora perché vuol dire che porti sfortuna al Milan.” Luckily for me, Milan won.

Fortunately, I’m not alone with soccer troubles. Last year, we took a trip to Taormina. At the end of the day, everyone got serious. We had to find a bar that was playing the Reggina-Atalanta game. It was the game that would determine which team be condemned to the lower league, Serie B. Antonella’s boyfriend, Ciccio was a huge Reggina fan (which I never understood). Through-out the game, Ciccio was comatose. Reggina was losing and tears began filling his eyes. Antonella thought it was sweet. Normally I admire a man who isn’t afraid to cry. But crying over soccer, particularly over La Reggina, was just plain pathetic. They always lose. Did this mean he cried every week?

Then there’s the female fan. This is something I have real trouble with. I remember a bunch of us gathered at my friend Carol’s house for lunch when Milan played Roma. Fabio, of course, was emozionato and wouldn’t touch his food. But something stranger was afoot. While Carol and I discussed movies, books and shopping over our pasta, Debora seemed like one of the guys, yelling at the TV screen. We invited her to join us. But she wasn’t interested. Debora, it turns out, was a huge Roma fan. I was confused. She must be smitten with Francesco Totti, right? Wrong. She was a true, blue Romanista, a fan’s fan. I never looked at her in the same way again.

I’ve been contending with soccer for two years now. Recently, my friends and I decided we had to counter-attack. We decided the only way to beat the mean soccer machine was to challenge it. So, we’re starting our own Sunday ritual. We haven’t worked out the final details yet, whether it’s a day at the movies, lunch or shopping. But one pledge is for sure, no more wasted Sundays. Oh, and when we do get our Sunday ritual off the ground, one rule will be fondamentale. Kitchen’s closed.