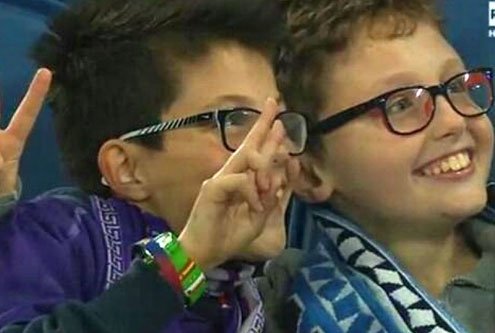 Italian kids choose their soccer loyalties early, and they usually stick for life.
A

nyone who knows Italy, understands that the official religion is not actually Catholicism. It is calcio. Or football. Or as we Yankees say, soccer. When I met my husband I learned that Rome has two big-league soccer teams: Roma and Lazio. Marco was a fan of the latter. With Lazio struggling, his fanaticism seemed to me like being a New York Mets fan when the Yankees were winning World Series championships.

So I asked him, “Why suffer? Can’t you just change teams?”

His reply was quick, cutting and in Italian. “You can change your wife or girlfriend during your life. But you can have just one mother and one soccer team.”

So my husband is what they call “a Laziale.” Until death do they part.

Last year, our older son started to show interest in soccer. Knowing his friends were Romanisti and his father was a Laziale put him in a real pickle. “Mom, I want to cheer for Roma but I don’t want to hurt Daddy’s feelings,” he told me.

To which I replied, “Leo you can choose any squad you like. It’s completely up to you.”

So he thought for a moment and made a diplomatic declaraton. “I choose Inter.” Inter is one of Milan’s two teams.

“Great!” I said, with parental support slash total ignorance. “I hope they have a great season!”

But a few months later Leo came back to me. “Mom, I really want to cheer for Roma but I don’t want to hurt Daddy’s feelings.”

To which I again replied, “Leo you can choose any squad you like. Even if Daddy doesn’t like it.”

He didn’t seem convinced. It was time for his father to step in.

“Marco,” I said, “Please tell Leo he can be a Romanista.”

Marco began to writhe and gasp. When he pulled himself together, he said something like he’d rather his son worked as a drag queen than root for Roma.

I was offended. I love drag queens. I hate narrow-mindedness.

“But I don’t want a Romanista son,” Marco said.

“We aren’t here to control our kids. We’re here to guide them and hope they make good choices in life.”

I was on a parenting roll, with some pretty sage advice so I continued: “Besides, Lazio loses all the time. If you ask me, the kid is making a pretty sane decision.”

Marco grumbled something inaudible but soon saw the error of his ways. He sat down with his first-born son to explain that although he could not switch teams, Leo was free to choose whatever squad he wanted. Worried that might be too much pressure for a seven-year-old, I told Leo, ” Take your time. Don’t pigeonhole yourself. Maybe you’d like basketball or hockey?”

The Italian soccer season recently began and Roma won its first two games. Lazio started with a win and a draw. As Leo basked in the glory of victory, Marco sulked as Lazio slid in the standings.

“Papa can we go see Roma play at the stadium?” said Leo in his glee.

When Leo asked again the following week, Marco didn’t answer and almost broke out in hives.

So I pulled him aside and reminded him of an old saying, “You can change your wife or girlfriend. But during your life, you have just one mother and one soccer team.” I even mocked his accent. He glared at me.

“Those were your words,” I reminded him. “Your son has made his choice. He can’t change now.”

My big Lazio fan finally softened up. “I will take to see Roma at the stadium. I love him as much as I love Lazio.”

Who knew that being a fan and being a father would bring out the unconditional love of a lanky Laziale? He may even get around to changing his team, but at least he won’t have to change his wife.