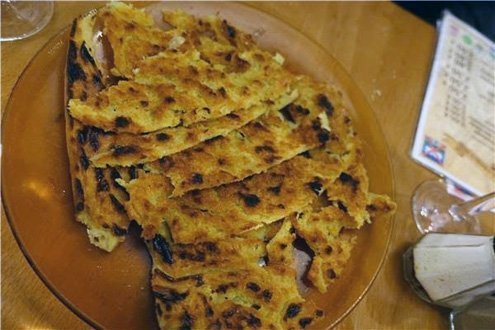 The socca in Nice is paper thin flat-cake that is crispy around the edges.
I

t might seem strange to fall in love with a pancake, but I have fallen. Hard. A coup de foudre right on the streets of the Old Town in Nice where we recently spent a few days eating á la niçoise, and discovered Chez Thérèse, a market stall on a mission.

Toward the end of a long and lively bank of open-air market food purveyors —vegetables, fruits, cheeses and fresh-baked bread — we spotted two women wedged between a case. Inside it were squares of pizza and onion pissaladiére on one side and stuffed vegetables and buttery tarts of Swiss chard on the other. But at the very end was an enormous meter-wide pan in which a golden brown crispy pancake sat waiting for starving market-goers such as we.

Where had I been all my life? I remembered farinata in Liguria, which is almost the same thing except for added chopped fresh rosemary or onions in the batter. But farinata, very much a Genovese invention, has a different texture. The Nice flat cake was paper thin and crispy around the edges, glistening with olive oil on its bubbly browned top.

As I stood there in awe and drooling, one of the lively ladies started whacking at the socca (as we discovered it was called), handing out golden shards in paper cones to a long line of those who clearly knew exactly what they were getting and wanted it now, while it was hot.

As our turn came up, the last remnants shockingly disappeared before our eyes. But just then an amazingly skilled young man on a scooter appeared with a fresh hot pan from the wood oven nearby, whisking away the empty one and quickly depositing the new socca, fragrant with extra virgin olive oil and woodsmoke.

We had hit the soccapot, literally, since a fresh pancake ensures that you’ll get the crusty edges as the socca server slashes the first serving quickly into many manageable pieces, dusts them with coarse salt and pepper and pops them into a paper cone.

You do not wish to stop eating socca. Ever. I promise you.

To make this at home, jack up your oven to its hottest temperature before cooking, 500-525F/275C and turn on the broiler. Place an oven rack about one third down from the broiler.

In a bowl, mix the flour, water, half the olive oil and salt and stir to a very smooth consistency, about that of heavy cream. Let rest 30 minutes to an hour for the water to absorb the flour.

Use the largest, flattest heatproof metal skillet in your kitchen. In both France and Italy, the socca is made in a huge copper pan that is preheated in a wood oven. Put your pan in the heated oven for 5-10 minutes, remove carefully and pour the batter onto the pan, tilting the pan to form a thin pancake.

Put the pan back in the oven for about 10 minutes, or until the socca is bubbling to a golden brown and crisp around the edges.

Remove and cut quickly into rough, manageable pieces, sprinkle with sea salt and pepper and serve with a nice cold rosé wine in cheap tumblers.

Wine glasses will also do.

Even paper cups are fine.

This is a proletarian pancake and needs no froufrou.

Make sure you arrive for the first cut, but be prepared for Cupid’s dart.