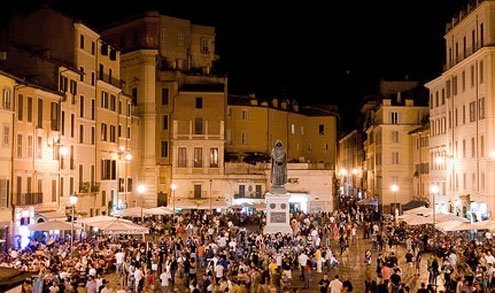 ate in August I was awakened at 3 a.m. by my friend Allison’s mother. Six hours away in Chattanooga, Tennessee, she apologized up but said she didn’t know what else to do. My nerves instantly a jangle, I mustered my strength, and desperately willed the cobwebs from my sleepy brain. Hearing her voice quivering and near tears, it was easy to know this was not a social call.

Allie’s mom told me that a strange man had called her from her daughter’s North American iPhone. An Italian, who she couldn’t understand, was trying to tell her something about her daughter. I asked her if she could recall any of the words he used but all she could put together was broken speech, “Lei e” and “malmissima????” and “Potatoe (sic) Santo.” Little made sense.

Sitting rigid, I told her mom to stay on the line, grabbed my mobile phone and tried reaching Allison, first on her local Italian mobile and then on her North American line. Both lines went directly to voicemail, which in Italy could mean many things: dead battery, thick palazzo walls and no cell range, or that the person might be engaged in a call.

Doing my best to calm her mom, I told her to sit tight, I would keep trying until I got through and would let her know something as quick as possible,

The hours passed: 3:30, 4, 4:30, 5, 5:30. I lost count of the number of times I dialed both numbers and I was running out of soothing words to tell an ever increasingly anxious parent 6,000 miles away. My feelings bounced from concern, to apprehensiveness, to paralyzed frustration at not being able to do anything except to repeatedly punch the redial button over and over again. Finally at 5:45 a.m. Allison picked up with a chirpy “helloooo.”

Relieved, I asked what was going on, explaining that her mom had been calling since 3 and was worried sick, afraid of the worst. To which Allison chuckled, “Whaaas mmum worried about? M’absolootlay bene, bene, bene. Ummmm heeeey whhas yer namme hic a…a… agen?“

Annoyance quickly replaced my dread. With clenched teeth I said, “It’s Lynda,” and spent the next two minutes futilely trying to determine just where she was. I didn’t get very far before she fell asleep with the phone still connected. She did manage to tell me she was in a hospital near the Tiber River and that doctors had her strapped to a gurney, with an IV in her arm.

I called her mom to let her know that her adult child was at least alive. I’d update her further as soon as I know just what had happened. I hung up, pulled on my jeans and haled a cab to the first, and then the second of the two hospitals located in the center of Rome along the Tiber.

I found Allie at Fatebenefratelli hospital, snoring in a corridor next to the nurse’s station, a bag of saline dripping rapidly into her arm. The nurse whispered that a Rome cab driver had dropped her off when he realized she was too drunk to tell him the location of her apartment. He said he’d found her passed out on the brick wall beside the pantheon.

As I tried to gently shake my friend awake, a stormy doctor arrived and waves a printout in Allie’s face. Scoldingly, he reminded her that like many young Americans, she drank too much. How much is too much? The doctor told Allie that her blood alcohol level was .34, a dangerously high level for a young woman with a small athletic build.

Hours later, Allie and I pieced together the days events. As a tour guide, she spends her summers baking in the noonday sun of Rome’s blistering heat. After giving a five-hour tour, she stopped by a bar in the city center to escape the heat and enjoy a glass of wine in the air conditioning.

One thing led to another, friends arrived, and her one glass turned to three or four over the course of several hours. After that she lost track. She remembered nothing about when or under what circumstances her friends had left the bar or how she got from Campo de’ Fiori to the Pantheon. She didn’t even remember riding with the knight in shining armor cabbie who got her to the hospital just in time.

Civilized societies have been consuming alcohol for thousands of years — yet of all the drugs available in the world, alcohol is still responsible for more injuries and death than all the other drugs combined.

I could have lost a friend this summer. So, as a wine columnist and friend, it’s time to remind those I care about to please drink sensibly. Know your body’s limits and if possible, drink with a designated driver, or in Rome’s case, a designated pedestrian. Your mother and sleepless girlfriends will thank you.