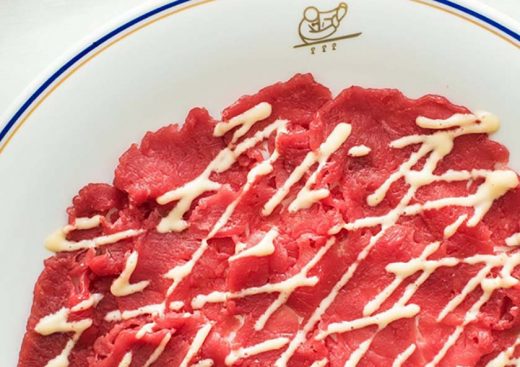 Carpaccio at Venice's Harry's Bar is legendary for its melt-in-your-mouth quality.
I

t’s August. The sun has reached its scalding zenith. Days stretch into night. There’s sand in the car. In addition to sporting ridiculous amounts of linen and hitting the rooftops for an aperitivo, food-conscious Italians respond to high summer with an array of refreshing cold dishes that bring lots of flavor to the table.

The ritual quest for the perfect scoop of gelato and the ideal slice of watermelon is backed up by a summer menu heavy on creative pasta and rice salads, chilled soups and cold meat dishes. Alongside them comes a welcome assortment of cold vegetarian options featuring fresh seasonal produce. Here are some of my cool summer favorites:

Pasta fredda, or pasta salad, is another Italian summer classic. Tomatoes, cubed mozzarella, basil, oregano, pitted olives, and a fine dusting of cacioricotta (a fresh goat dairy product made like ricotta) tossed with pasta is the answer to many warm summer nights. . If you don’t like the non-al dente effect of pasta salad, try making this dish with Sardinian fregula, buckwheat, bulgur, or quinoa instead.

Cool, refreshing, and revitalizing Vellutata fredda soup is ideal when it’s blisteringly hot outside and sloth has laid siege to your limbs. Assemble in-season zucchini, peas, carrots, cucumber, sweet peppers, and heirloom tomatoes, steam them for only a few minutes, and then blend along with some plain yogurt and herbs of choice. Chill and serve with a spoon.

In neither the salad nor the pasta realm, carb-happy Panzanella is a fantastic cold summer dish made with bread. Panzanella is an excellent example of how Italians make good use of leftovers. Day-old bread is broken into chunks, mixed with olive oil, salt, and vinegar before being tossed with diced tomatoes, thinly sliced cucumber and red onions, basil, and more olive oil. Panzanella is best paired with meat or fish, and almost never served before a pasta dish.

Some simplify and make typical Piemontese Vitello tonnato with mayonnaise, but the true recipe doesn’t call for it. This summer delight has roots dating back to the 18th century. If the rule is to never mix meat and fish, vitello tonnato does precisely that and gives us a fantastic, bizarre, and totally delectable meal. A whole deboned veal rump-cut is seared and then covered with lots and lots of onions before slowly braising with broth and white wine, reducing the onion sauce to a dense gravy-like texture. To complete the dish, blend tuna, drained of excess oil (don’t use the water-packed kind!), a hard-boiled egg yolk, along with a handful of rinsed capers, and the onion gravy turns into a thick cream. When the veal has cooled, carve it thinly across the grain and arrange the slices on a large platter in a single layer. Slather the creamy tuna sauce over the sliced meat, covering it completely. Garnish with a few more capers and chill before serving.

Another summer classic is Polpettone di tonno or tuna meatloaf. The tinned fish, as you may have noticed, plays a large role in the Italian summer menu. For this seasonal staple (which is also a great sandwich filler for beach picnics) you’ll need well-drained oil-packed tuna, coarse homemade breadcrumbs, grated Parmigiano Reggiano, eggs, and fresh basil. Put the tuna and eggs in the blender to obtain a supple purée. Remove from food processor and knead in the breadcrumbs, chopped basil, and cheese. Wrap the tuna mixture in a clean kitchen towel and fasten the ends with knots, candy wrapper-style. Cook the “candy” for 20 minutes in plenty of boiling water, unwrap and allow it to cool completely. Serve sliced alongside tomato and arugula salad.

I’ve never been to the small Sicilian island of Pantelleria, but it’s on my bucket list. Crystal waters, bacio pantesco (a special star-shaped dessert named after a kiss, halfway between a waffle and a cream puff sandwich filled with sweetened ricotta), and Insalata Pantesca are the main draws. This vegetarian salad named after the island is a summer must: boiled potatoes tossed with raw red onions, tomatoes, pitted black olives, and tiny salt-packed capers native to the island. Extra virgin olive oil and Mediterranean herbs like oregano, thyme, and fresh basil complete the dish.

Carpaccio at Harry’s Bar in Venice is still created in the same way as when it was first invented in 1950, by covering a plate with the thinnest possible slices of raw beef and garnishing them with a secret dressing called “universal sauce” drizzled in a crosshatch pattern. Other types of carpaccio include covering the paper-thin slices of beef with fresh arugula and shaved Parmigiano Reggiano; or simply dribbled with lemon juice, dusted with freshly cracked black pepper, and only a thread of olive oil. Seafood restaurants have been adding fish carpaccio to their summer menus, and serve thinly sliced fillets (smoked or not) like amberjack, salmon, trout, sea bass, or other native varieties.

Bollito freddo alla Genovese is a specialty of the city of Genoa, a humble dish that uses leftover boiled beef, spiking it for flavor with other “poor” ingredients, such as galettes (a seafarer’s onboard staple), capers, and anchovies. The rusk, toasted bread, or other cracker-like bread is soaked with white wine and layered with sliced boiled beef and salted anchovies and then dressed with a sauce made with crushed capers, local extra virgin olive oil, salt, and vinegar. Chill and serve paired with an equally cold bottle of Rossese di Dolceacqua wine.

And there you have it, nine delicious chilled dishes perfect for beating the searing summer heat.