So far as war allows 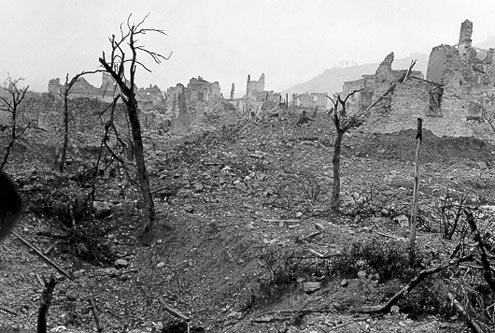 Devastated Cassino after the bombing: a strategic error.
T

oward the end of World War II, Allied troops backed by massive air support destroyed the glorious Monte Cassino abbey north of Naples. It was among the war’s gravest miscalculations.

Founded in 529 by St. Benedict of Nursia, the father of western monasticism and the patron saint of Europe, the monastery, pitched atop the remains of an old pagan temple, had been restored several times, most recently in the 1300s after medieval raids and natural disasters had taken their toll.

Strategic planners saw the entrenched German troops in the mountainous religious sanctuary as an impediment to their advance after repeated efforts to take it led to heavy casualties and retreat.

In the winter of 1943, the German high command incorporated the ancient abbey into the Gustav Line, the strongest coast-to-coast Italian strategic wall south of Rome. That decision doomed Monte Cassino, a sacred shrine and an intellectual hub where St. Benedict had authored his rules for monastic living and Thomas Aquinas had received spiritual instruction.

When the Axis powers surrendered North Africa in May 1943, the Allies, led by British and American troops, prepared to invade Sicily and the Italian Peninsula. Knowing the peril invasion posed to Europe’s vast cultural treasures, U.S. President Franklin D. Roosevelt appointed the Roberts Commission, tasked with protecting and salvaging artwork and historic monuments in war-afflicted areas captured by the Allies. In orders sent out to all U.S. commanders in December 1943, Gen. Dwight D. Eisenhower implored soldiers to respect — “so far as war allows” — Italy’s illustrious heritage. “If we have to choose between destroying a famous building and sacrificing our own men, then our men’s lives count infinitely more and the buildings must go,” said Eisenhower, who would be elected president less than a decade later. “But the choice is not always so clear-cut as that.”

By Dec. 1, 1943, the U.S. Fifth Army had slogged its way to Liri Valley, a crucial section of the Gustav line and a gateway to Rome. Between the Allies and the Liri stood the hilltop town of Cassino, dominated by the storied abbey. All winter long, Nazi troops fired at the exposed, rain-soaked Allies from above.

At 1,600-feet, snow-capped Cassino was a perfect vantage point and among the strongest defensive posts in military history. The Germans repelled repeated attacks.

Bombing the abbey presented exactly the sort of murky conundrum Eisenhower presaged. As Robert M. Edsel noted in “The Monuments Men: Allied Heroes, Nazi Thieves, and the Greatest Treasure Hunt in History,” the advancing troops would have preferred to leave Monte Cassino intact. But after Allied reconnaissance planes reported shelling from the monastery, they became convinced that it was German-occupied.

The press, embittered by the appalling numbers of publicized wounded and dead, embraced the notion — Allied forces suffered 55,000 casualties in the Battle of Monte Cassino. “The more the press and soldiers looked to the mountain,” wrote Edsel, “the more they saw the abbey not as a world treasure but as a leering death trap, bristling with German guns.”

Both the Germans and the Allies had promised Pope Pius XII that Monte Cassino would be spared. In December 1943, Albert Kesselring, Germany’s commander-in-chief in Italy, ordered all German soldiers not to occupy the abbey, copying the Allies and the Vatican in on his order. But on Feb. 15, 1944, the Allies, believing they had little other choice, launched a third attack, a massive aerial assault that unloaded 1,100 tons of bombs on the town. Monte Cassino vanished from the map.

Almost immediately, the bombing was decried as a tragedy. Worse, it was soon discovered that no German soldiers had been inside the abbey; they’d taken up more secure positions. Instead, the Allies killed 230 Italian civilians who had taken refuge from the fighting inside. While the pope stayed mum, his secretary of state, Cardinal Luigi Maglione, denounced the attack as a “colossal blunder” and a “piece of gross stupidity.” In propaganda terms, both the Germans and the devastated Italians used the Allied disaster to their advantage. “If this what the world could expect,” wrote Edsall, “then the Allies were the barbarians and traitors.”

The blow got worse when German paratroopers were dropped into the leveled ruins and soon converted it into a fortress, with rubble giving them an even greater strategic advantage. It was finally taken by Polish troops, fighting with the Allies, in May 1944.

Monte Cassino was rebuilt after the war, though its libraries, art galleries, and the monastery itself had been obliterated. But the foresight of two German officers saved priceless artifacts. In November 1943, under the direction of Capt. Maximilian Becker and Lt. Colonel Julius Schlegel, both members of Hermann Göring Panzer Division, Monte Cassino’s archives were packed up and moved to Rome, mostly by frightened monks. Truckloads of precious cargo, including paintings by Italian masters and tens of thousands of documents written on parchment, were spirited from the war zone and deposited between Vatican City and Castel St. Angelo.

In “Monte Cassino: The Story of the Most Controversial Battle of World War II,” authors David Hapgood and David Richardson state the obvious and the essential: “In three weeks, in the middle of a losing war, in another country, it was quite a feat.”