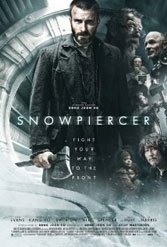 In 2014, mankind unleashes a chemical to control global warming. The result is a global freeze and a dead planet. Except, that is, for survivors residing on a “sacred” salvation train that has been circling the globe for 17 years. But this is no ordinary trans-Siberian Express. It’s a futuristic “Titanic” in which passengers and their lives are strictly divided along class lines, with the tail-enders as the scum of the earth and the front-enders worshipping the man behind it all, cult-of-personality leader Wilfred.

The genius of South Korean director Joon-ho Bong futuristic fantasy is to encase the brutal history of class oppression (and deceit) in length of 1,000 snaking train wagons. The steerage filth, led by reluctant leader Will (Chris Evans), seeks to overturn their affluent masters, including soldiers and assassins. Will, attempting to succeed where others have failed, must lead a city-train armed revolt that bludgeons its way back-to-front through drug dens, schools, discos and greenhouses. His medieval legions must also take down Wilfred’s second-in-command, Minister Mason, a screeching dowager played in wicked witch style by an unrecognizable Tilda Swinton. In this feudal ecosystem of a train, “Everyone has his preordained position,” with the population kept steady through force-fed social Darwinism.

In all, it’s a wildly imaginative, ironic and eccentric conceit that mimics the tone and style of Terry Gilliam’s 1985 “Brazil,” losing steam and luster only when it expends a wasteful final 30 minutes trying to tie up narrative loose ends. Never lacking in ambition and as heavy on ideas as action, “Snowpiercer” is a masterful, hallucinogenic allegory as applicable to pre-revolutionary France as Czarist Russia.

Based on the Franco-Belgian science fiction comic “Le Transperceneige” by Jacques Lob and Jean-Marc Rochette, this is upscale whimsy that doesn’t play by the rules.