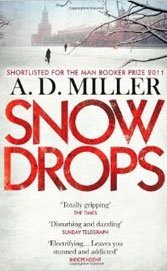 Thirty-eight year-old Luton-raised Nick Platt is an international lawyer in boomtown Moscow during the first incarnation of the Putin presidency, the wooly years between 2004 and 2009 when Russia was booming and dirty money billed as clean as snow. He’s a sheepish, yes-man expat for whom Moscow’s “crazy mix of filth and glory” is a tempting gondola on a Ferris wheel in some far-from-home amusement park. Until he meets sisters Masha and Katya, both from outland Murmansk, and with them their elderly aunt Tatiana, apparently eager to move from her city center apartment to suburban development. Paper-pusher Nick can’t get enough of Masha, in and out of bed, and he’s just affluent enough to dupe himself into a corruptly tinged romantic fantasy — “life without a seatbelt” — that’s destined to end badly. The unhappy needing is a sure thing since A.D. Miller’s superbly-written debut novel takes the form of a confession: Nick telling his London fiancé the truth about his entry into the unabashed Moscow netherworld of scammers, crooks, wisecrackers, money launderers, cheats and a plethora a prostitutes — “… leggy desperate girls were Russia’s main national product, after oil.”

Miller’s transfixing thriller hits all the right notes, girded by his three-year stint (2004-2007) as Moscow correspondent for The Economist (he smartly refers to Putin only as “the weasel President.”) The story’s strength is its vividly sinister portrayal of Moscow life — pushed into overdrive by sisters who aren’t sisters — and by Nick’s own sordid enthrallment with the dirty little cast around him (“Russia, with its talented sinners and occasional saint…”) The only problem is duped Nick’s boundless naiveté, which his Masha-rapture excuses up to a point. He speaks of “the stain that I darkly knew was coming” even as its gobbling him up whole. “Be careful,” a Cossack bad guy warns Nick early on: “Sometimes, in our Russia, people can be less kind than they seem. You get me?” He doesn’t. Short-listed for the 2011 Man Booker Prize.