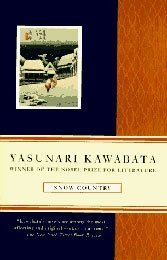 Kawabata’s acclaimed 1956 short novel is about love’s limitations and the improbability of emotional fulfillment. Shimamura, a married “idler” with plenty of money and a penchant for Western literature, becomes involved with a teenaged geisha name Komoko while at a ski lodge he visits to get away from Tokyo’s meaninglessness. Komoko, though herself a little lost, is “replete with direct, immediate feeling,” which Shimamura falls for because he lacks it himself.

In common with the existential protagonists of the 1950s, the unfocused Shimamura sees life as a “wasted effort,” a phrase that emerges often in his self-indulgent musings. Komoko and her mysterious friend Yoko by contrast represent a range of passion, grief, hysteria and lust that keep Shimamura in thrall, but to which he can’t respond, lacking the means and will to escape his “sad little dream world.” He is selfish and desiring; Komoko is intense and insecure; the affair is doomed.

Kawabata’s spare and melancholy prose satisfies two goals. The first is to establish an unbridgeable gap between city and high country (“Tokyo people are complicated,” Komoko tells Shimamura, “They live in such noise and confusion that their feelings are broken into little bits.”); the second is a passionate portrayal of love’s futility (“The labor into which a heart has poured its whole love — where will it have its say, to excite, and when?”) Shimamura can’t answer these most important of questions. Instead, “nothing went out from him to her,” whereupon snow country swallows up what’s left of human intimacy. Nobel Prize winner Kawabata, a sentinel for sadness, committed suicide in 1972.