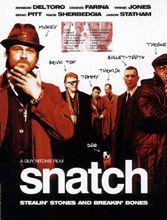 Credit Guy Ritchie for leaning on Jason Statham, who helped anchor “Lock, Stock, and Four Smoking Barrels.” Here, Statham is Turkish, who along with Tommy (Stephen Graham), get into Ritchie-style trouble when a rigged fight goes awry thanks to a wild Gypsy trailer-dweller named Mickey (a joyously incomprehensible Brad Pitt, who seems for once to enjoy himself). Now, T&T are in trouble with a promoter named Brick Top (grin-mashing Alan Ford) who feeds bodies to pigs.

Ah, but that’s just a tender sidebar. There are diamond thieves (Benicio Del Toro as Frankie Four Fingers), ruthless Jewish jewelers (led by, yes, Dennis Farina), and a Russian mobster called Boris the Blade. Is it possible to spoof a spoof? Yes, but only when you turn film into cartoon. “Snatch’s” strength is its deadpan zaniness and snippets that speak only for themselves. There’s an organic madness to Ritchie’s criminal method, which puts the movie midway between satire and camp.