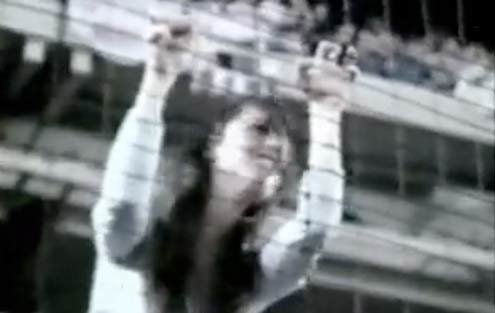 The woman in the stadium.
I

found two of my favorite photos on a news agency desk 40 years ago. Both are of a brunette clinging to wire netting. She’s in a stadium and thrilled.

In those days I’d take home prints I liked; the office discarded the unused ones. I framed a few and put others in boxes. I didn’t know how rude time and light were to photographic chemistry.

Stills don’t have the same suggestiveness as they did in the heyday of Life Magazine, when they all but propelled action. Mainstream photo exhibits now struggle to fight off obsolescence. Web photo essays rotate images. Mobile phones display contrails of moving light. Postmodern visual life takes a cue from a four-year-old reluctant to stand still.

But my brunette is frozen.

I remember liking her face, blurred and urgent, and the way her hands curled around the netting. I kept the photos in a file that included another favorite image, of a naked woman standing in a bog covered in ash following volcanic eruption in rural Colombia. She looked like a fashion model nature had fossilized for show.

Mood-wise, the Colombia photo shared alleles with the famous National Geographic shot of a teenaged Afghan woman villager with nebula eyes. That shot circled the globe. The photographer mistakenly went back to find her 20 years later, by which time she was sand-aged and hardscrabble. The arid sequel blew away original’s stardust sprinkles. It was then-and-now for all the wrong reasons.

Maybe that’s why I never thought to investigate the woman in the stadium. I preferred treasuring her in a male sort of way, a time-to-time mystery contingent on many kinds of impossibility.

It’s fair to say I followed in the ill-advised footsteps of the National Geographic photographer. I had no Afghanistan but I did have a face. I thought of the woman in the photo whenever I saw old YouTube footage of stadiums and concerts. Once in a while I felt like I’d rammed my finger into a live socket.

In footage of a 1996 Sheryl Crow concert in Los Angeles I saw a face that was nearly identical to that of a woman I’d once loved deeply. Not her, couldn’t be… Or was it? I moved on.

Further photo investigations were occasional at best. I don’t like most contemporary music. I’m unmoved by rap. I grew up amid the catchy pop harmonies of the 1960s. Even lyric rage had harmonic foundations.

That eventually led me to The Beatles.

The musical romance they produced contained my puberty. How many years had it been, I wondered, since I’d last listen to a Beatles song? Had I ever even seen live footage? The answer was no. In those days I lived from album-to-album. Moreover, The Beatles had swiftly evolved into a studio band, unwilling to accept the tolls of touring.

To my amazement, I found footage of The Beatles Shea Stadium concert in August 1965. It was the concert-to-end-all-concerts at the time. The band toured the United States at the height of its fame and 55,000 fans trooped to a baseball stadium to hear them, the faces of shrieking young women looking like so much confetti. Not a normal turn of events in 1965. High-end tickets topped out at $5.75.

Shea was a two-way expression of irrational devotion with music as a condiment. What happened was incomparable. The band couldn’t hear itself. No wonder they stopped touring. No wonder John Lennon later remarked that The Beatles were bigger than Jesus Christ. Seeing it all 50 years later makes a 24-year-old’s loss of perspective far easier to understand. Hysteria emerges from bottled-up anticipation, which diffusing, participatory technology has mostly immunized against.

The Shea music is majestic. So is the band’s composure. I left my favorite song for last, “Ticket to Ride”.

To me, “Ticket to Ride” is pop music’s most hopeful, bittersweet ballad. Though the girl of the lyrics is going away, the melody is up-tempo. It’s Paul McCartney’s true romance blended with John Lennon’s murky optimism. The girl may be leaving — she wants to be free — but she still drives the boy mad.

She’ll do right by him. Or will she? She doesn’t care. Or does she?

And then I saw her.