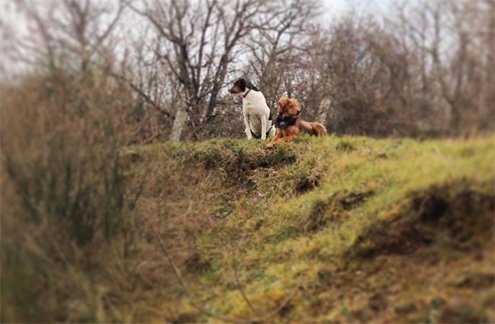 Working in nature for hours at a time can send you into a trance.
W

hen I am working on my plants — it would be nice to say in the garden, but it is really more of a farm — I go into a sort of trance. I talk to myself, I laugh, I lose track of time.

Four of my 100 olive trees were uprooted by a violent windstorm in early March. They lie on their sides like soldiers in camouflage on stretchers during wartime. Their arms reach out to grab me as I walk by. Gnarled and dying. I start working on one of the trees and radically prune back its branches. I will eventually try and replant it, when someone comes to help me move it. If the roots take, fine. If not, this means there will be room for another fruit tree.

I heap the olive branches and their silvery green leaves in an empty space on the gravel in front of the house so I can burn them. I try with firestarter cubes but the twigs and leaves are too young and the flame goes out. If I had some gasoline in the canister, it would start easily. I try using a broken cane screen as kindling together with a cube. That seems to work: there’s a blaze and crackling.

I move back and forth between the jobs: pruning the branches, heaping them on the bonfire, and tending to the fire, making sure it doesn’t go out. After cutting back all the foliage and thin branches, the fallen olive tree looks more like Otzi the cave man.

I move on to cutting back the wild blackberry bush. If it were any warmer outside there would be scorpions under this bush. I know because I’ve seen them there. And when I see them, I always scream. Very loudly. I also run around in circles. It’s cathartic. Then I calm down and squash the little suckers. Luckily, it’s still chilly and they’re not out.

The blackberry bush has ivy plants, morning glory flowers and broom bush woven through it. It’s a tangled mess. Clearing this area is gratifying, pure and simple. I don’t feel the thorny bushes on my skin, even though they catch on my sweater, vest, pants, gloves, and hair. I just move forward and shake them off.

Weeding the gravel parking area comes next. This is a slow, labor-intensive job that probably no one (except me) will ever notice. Thankfully, it’s a limited area. The driveway would be another story, but there the weeds have grown in a neat landing strip formation. I use a sharp hoe to uproot the sticklers, some of them quite pretty. Every 10 or 20 plants, I go back, pick them up, and stack them in the wheelbarrow. At least an hour passes. Maybe more. I check the smoking olive branch pyre and laugh about mixed metaphors. We smoke a peace pipe. We extend olive branches. I’m smoking olive branches.

The laughter feels good. It breaks the silence. The silence that is not really silence at all. The dogs bark when they hear a distant car. Someone is cutting wood down the hill with a buzzsaw. The wind makes the chimes tinkle. My phone beeps now and then but I ignore it. A pheasant in the woods warbles his deep-gullet call.

I feel my back starting to ache but there’s still so much to do. I want to take my oleanders out of their pots and build a border with them in the parking area. I have raspberry canes that need to be planted. And herbs that need to be taken out of the greenhouse and planted in-ground. The greenhouse! It needs organizing. And what about the lawn grass? Grass, the bane of my existence. There’s weeding to be done in other areas, too. It never ends.

I decide to end my work with the raspberry bushes. They are simply too precious and I don’t want to keep them waiting. I have the perfect space: a fence in the back not far from my laundry line. The soil is damp because of run-off water. But I have minimal energy left. My hands are stiff. Blisters will have formed under my gloves. I follow the instructions that I garnered from a Youtube video the day before, but I’m tired. The work is a bit sloppy. It’s not the best ending. But I can always go back to it.

I gather my tools, put them back in my disorganized greenhouse, and stumble inside. It’s been a glorious and productive morning. My mind was entirely absorbed with what I was doing. I was carried along by the action. Everything came naturally. If only writing was the same. But it’s always such a huge effort to write. To start, to settle on an idea. Doubts and questions pierce me as I go. But when I do succeed, when I actually bring a piece of writing to its ending – and it may be sloppy at first, but I can always go back and edit it — I feel better, stronger, smoother. More present. In this I stand with Dorothy Parker and her apt comment: “I hate writing; I love having written.”