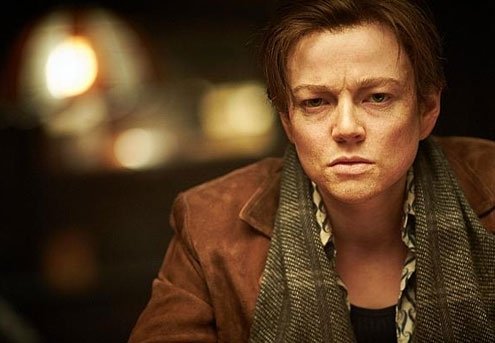 Sarah Snook as John-Jane, or "The Unmarried Mother": forward or backward, nothing changes.
B

ased on the 1958 Robert A. Heinlein story “‘—All You Zombies—’,” Michael and Peter Spierig’s time travel, precognition-tilted thriller lives an imperfectly charmed life from start to finish. It opens assertively and never backs away from a stylish and confidently surreal mood, a rare feat in an era that often puts slashing androids ahead of subversive ideas.

The early going belongs mostly to Jane (Australian Sarah Snook), now true romance writer John, who tells her story beginning in Cleveland as an orphan girl in 1945, and eventually moving on to gender complications of the first order (Jane-John is known only as “The Unmarried Mother” in the Heinlein original). Brilliant Jane-John, an arresting facial cross between Jodie Foster, Amelia Earhart and Leonard DiCaprio, recounts her life as an orphan, her impregnation by a handsome stranger, the mothering an daughter who is later abducted, and later working to make the grade as a bizarre 1960s female space cadet — or so she thinks. It’s all heady and mystifying in the best of ways.

Vengeful Jane-John, who rages at the man who left her pregnant, is listened to by The Barkeep (Ethan Hawke), a clandestine assassin associated with the Temporal Bureau, a retro-futuristic department based in 1985 while hop-scotching through decades in groundhog day-styled effort to thwart a 1970 New York City killer called “the Fizzle Bomber.” The agent and his boss Mr. Robertson (Noah Taylor) believe John-Jane might be able to thwart the Fizzle Bomber’s plot.

All these timekeeping pieces fit will eventually fit together in the most alarming of ways, but the provocative end result may matter less than the uncanny human dimension offered up by the two leads, especially Snook. Her deadpan gender manipulations are hypnotic, giving sway to the whole of the story even when its focus turns to Hawke’s “temporal agent,” whose own secrets deepen an already dense intellectual treasure chest.

Heinlein’s story was a neat bit of sorcery that used time travel to concoct the most uncomfortable of sexual paradoxes — the creation of a character which, depending on when it is come across, could in theory be both its own mother and father, forever tricked into an endless procreative loop — “A snake that eats its own tail for ever and ever.” But it also posits time travel as its own dead end. The self is “sure” of what it is until leaps in time suggest something shockingly different, marring all that was previously “known,” after which there’s no escaping destiny because the idea of separate solutions constantly defeat each other. Interference and attempts at alteration never change the substance of the ending.

That the Spierig Brothers (born in Germany but raised in Australia) are able to commit a great deal of what Heinlein had in mind to film without veering from the deftness of the prose is tribute to their affection for words and ideas, careful attention to detail, and the restraint of both Snook and Hawke, who never oversell themselves or their parts.

This is film less to be analyzed than seen. “What the fuck did I just read,” Hawke was quoted as saying after going through the script. Well spoken. He immediately signed up to join the project.

Predestination ★★★ 1/2 Directed by Michael and Peter Spierig, based on ‘—All You Zombies—’ by Robert A. Heinlein. With Ethan Hawke, Sarah Snook and Noah Taylor.