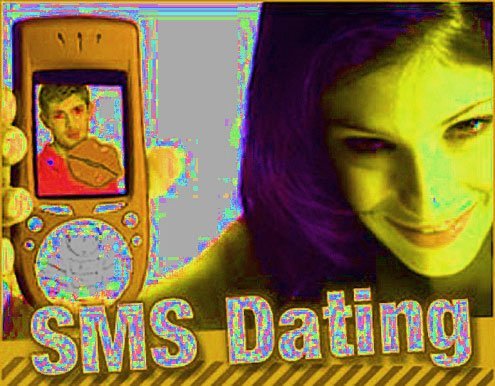 My friend John has on occasion been found asleep with his Nokia beside him on the pillow instead of a teddy bear or, alas, a woman.
T

he following is a brief conversation between me and my telefonino: Me: “Okay you demon of fetishistic technology, you miserable gadget of useless wiring, you horrible sorceress of tormented souls; beep! If I stare at you long enough, if I rub you between my hands like a magic bottle with a genie, if I focus all my mental powers on you; you will beep!”

Me: “Greatest Aurora, precursor of the dawn, thank you! Please let this be a text message from HIM!”

As I begin the lament of my great distress, what mourning shall I strive to utter? What muse shall I approach with tears of songs of death? Sirens, may you come to my mourning with Libyan flute or pipe or lyre, tears to match my plaintive woes!

Anyone with a telefonino and a heart will recognize the torment of waiting for a text message that never comes or the riveting ecstasy of receiving the message that does. Like the epic hero Odysseus who resists the sweet singing of the sirens by strapping himself to his ship’s mast and stopping the ears of his shipmates with wax, the beep of an incoming SMS message is the making of Greek tragedy or comedy, with very little middle ground.

You’ll remember the “Six Million Dollar Man?” On the popular television show, Lee Majors plays an improved human whose flesh and bones are augmented with wiring and circuit boards after a debilitating space accident. I can’t help but feel that the telefonino is the first element of our own androidization. The wireless appendage has replaced our ears and our vocal chords in the same way Major’s limbs and eyes are replaced with robotic upgrades.

If you consider SMS sex, other organs may have been replaced as well.

Here are a few of my favorite messages, jealously safeguarded on my SIM card:

(A potato? Who cares who you are!)

Text messages are a direct way of communicating a sentiment of love without the pressures of eye-to-eye contact or fear of rejection. (A slap in the face for Mr. Mashed Potato.) And, since text messaging puts you at a safe distance from the intended recipient, they are an ideal medium for breaking up with a partner (minus the slap).

Shahrazad, the Persian princess from “The Arabian Nights: Tales from a Thousand and One Nights,” marries King Shahryar — a man who kills his new wife every night because he is afraid she will stop loving him. Clever Shahrazad, endowed with intellect and erudition, tells him of Sinbad the Sailor and Ali Baba and the Forty Thieves and others stories so engrossing, the king decides to postpone her execution night after night.

Similarly, my friend John — who has on occasion been found asleep with his Nokia beside him on the pillow instead of a teddy bear or, alas, a woman — makes a point of ending each text message he sends with a question in order to keep the conversation alive.

For example: “Did you ever get my last FOUR text messages?”

[John’s note to editor: This particular message was of course never written, but the point is well-taken.]

When I asked John to explain his SMS strategy to me, he cited Cyrano de Bergerac.

Monsieur le Bergerac hid in the bushes and whispered romantic pickup lines into his handsome buddy’s ear in order to woo Roxanne. Cyrano has a big heart and a nose to match. The friend, on the other hand, is hopelessly inarticulate. In the end, the spokesperson is able to hook Roxanne’s interest but only the poet can hold it.

John admitted he often relies on an outsider’s input when drafting his most intimate text messages.

A few weeks ago I had lunch with another friend who was intent on composing an irresistibly romantic text message for the woman he had his eye on. We scratched our heads, discussed, drafted various messages between bouts of giggles. The fruit of our collaborative effort was the following pearl: “I miss you more than yesterday, but less than tomorrow.” Sufficiently earnest and satisfyingly cheesy, we determined. He sent the message and waited. No answer. No answer. No answer.

Later that day, my Sony Ericsson uttered its familiar “beep-beep.”

Me: “Greatest Aurora, precursor of the dawn, Thank you! Please let this be a text message from HIM!”

My telefonino: “I miss you more than yesterday, but less than tomorrow.”