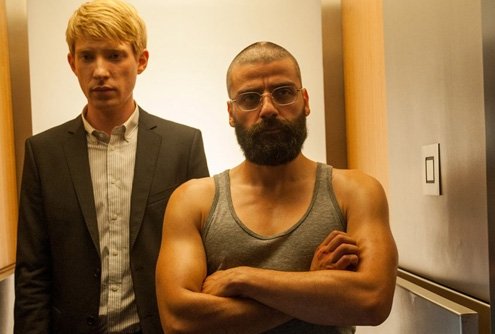 ritish fantasist Alex Garland has always been fascinated by claustrophobia and contagion. He likes loners and outcasts and probing the harm people can inflict at close quarters. There’s no deviation from these predilections in “Ex Machina,” his provocative if predictable Frankestein-cum-cyberspace foray into artificial intelligence.

Caleb Smith (Domhnall Gleeson) is a gawky programmer for Google-like search engine Blue Book wins a contest allowing him to spend a week with the company’s reclusive genius CEO Nathan (Oscar Isaac), the slangy (“buddy!” “bro!” “dude!”), a Silicon Valley-style eccentric who lives in an underground mountain mansion amid jungles and glaciers that only a helicopter can reach. Caleb’s weeklong challenge, as Nathan explains it dude-to-dude, is to determine whether Nathan’s homegrown humanoid — a gorgeous and literally luminous woman named Ava (Swede Alicia Vikander) — passes the Turing Test that would qualify her as a conscious machine and an independently thinking entity.

It’s a task the mesmerized if overmatched Caleb seizes on willingly, at once suspicious of Nathan while slowly slipping into the flirtatious machine’s clever thrall. What Garland is up to isn’t new. He’s poking around at whether a machine can be conscious not only of its humanity but also of the possibility of its own termination. The matter of the latter, which pits Nathan, Caleb and Ava into a chess match (complicit speechless Japanese woman-servant Kyoko), draws on all sorts of specifically cyberspace-oriented concerns: data harvesting, hacking, porn, sex slavery, and the extent to which a simulation, or a game, can fool its own jadedly futuristic programmers. (Nathan: “One day the AIs are going to look back on us the same way we look at fossil skeletons on the plains of Africa. An upright ape living in dust with crude language and tools, all set for extinction.”)

What gives Garland’s effort punch is Caleb’s wide-eyed naiveté set against classic wizard-villain Nathan, which Isaac occupies with sinister zeal. “Dude,” he beseeches nervous and nerdy Caleb, “can we be two guys?” But scheming Nathan, the new Dr. Frankenstein, is anything but just a guy. He’s a villainous, subterranean Steve Jobs intent on making an autonomous sex doll (“The challenge is not to act automatically. It’s to find an action that is not automatic. From painting, to breathing, to talking, to fucking…”) No wonder he installs a slit and sensors where Ana’s human vagina would be.

While Garland does his best to give Ana soul, spirit and (conniving) purpose she’s really just a smart toy trying to outwit her maker-captor and manipulate a would-be savior who is too good-natured to imagine that artificial intelligence also comes with artificial deception.

Garland’s script is mostly sharp, astute and demanding, putting his film a notch above most cyber-fiction. But his girl-powered “revenge of the robots” trope can wear thin at the edges. A depraved mastermind secretly creating supermodel-like machines is a soft-core fantasy in disguise. Ana’s intellectual purpose comes with built-in sexual connivances programmed in by her lascivious master — until she decides she’s in no mood for an upgrade.